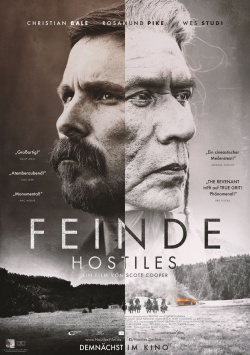 New Mexico, 1892: As his last assignment, of all things, deserving officer Joseph Blocker (Christian Bale) is to grant ailing Cheyenne chief Yellow Hawk (Wes Studi) his final wish to be allowed to die at home. The officer and the Indian, who has spent the last few years in prison, have a history together, which is why Blocker has nothing but hatred for the dying man. But he must obey the orders to take him and his family to his old tribal territory. Along the way, Blocker and his posse come across a desperate Rosalie Quaid (Rosamund Pike), whose entire family was slaughtered by Comanches. She joins the group because she won't be able to survive on her own. And Blocker, too, must gradually realize that they will only survive this difficult journey if he puts aside his hatred and they all stick together.

For his latest film Finde - Hostiles, award-winning director Scott Cooper (Crazy Heart) has once again teamed up with lead actor Christian Bale, from whom he was already able to coax a great performance in the drama Eye for an Eye. He succeeds again in this western, whereby here even more than in Scott's previous films other aspects play into the extremely positive impression that the work leaves behind. The story is not only carried by strong actors like Bale or Rosamund Pike. Also the great camera work of Masanobu Takayanagi and the atmospheric music of Max Richter make the rather conventional story about revenge, guilt and forgiveness to a great cinematic experience.

The sustained narrative pace, however, could tug very hard on the nerves of some viewers. For instance, there are a few dialogue scenes that drag on extremely. It's not uncommon to wonder if a few cuts and about 15 minutes less wouldn't have done the film some good. On the other hand, the slowness adds considerably to the very special atmosphere of the film and makes the more action-packed, sometimes surprisingly brutal sequences all the more intense. Still, some of the tough conversations only highlight how broken Blocker's squad is, scarred from years of fighting and killing. The film does a pretty good job of making that clear without a lot of words, though, so a few cuts probably wouldn't have hurt the overall picture.

Find - Hostiles is therefore more of an arthouse western than diverting popcorn entertainment. You should know that before buying a movie ticket. However, if you want to be intoxicated by good actors, great pictures and a thoroughly exciting story, this is the right movie for you. Overall, there is therefore with small restrictions still a: Absolutely worth seeing