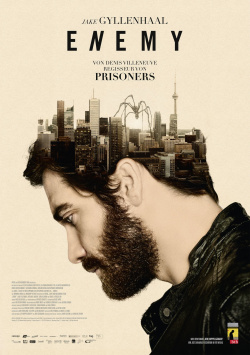 History professor Adam (Jake Gyllenhaal) desperately struggles against the routine of his everyday life. Neither his lectures, nor his regular flings with his girlfriend Mary (M&eacute;lanie Laurent) inspire anything like passion in him. When a colleague tells him about a film that Adam absolutely has to see, the boredom comes to an abrupt end. In the film, the young professor discovers a supporting actor who looks almost eerily like him. Intrigued by this discovery, Adam sets out to find out who his mysterious doppelganger is. When he finds Anthony (Jake Gyllenhaal), he causes a major disruption in his life as well. And with their first encounter, a game of confusion begins in which the lines between delusion and reality seem increasingly blurred.

Before directing his thriller-drama Prisoners, Denis Villeneuve made his English-language directorial debut Enemy in Toronto, also with Jake Gyllenhaal. Based on the novel The Double by Jos&eacute; Saramago (The City of the Blind), Villeneuve has directed a psycho trip that feels a bit like the brainchild of David Lynch and David Cronenberg. Even the mystical opening sequence creates an oppressively fascinating atmosphere that becomes more and more condensed as the story progresses. Coupled with the engaging imagery, it's nearly impossible for the viewer not to be captivated by the enigmatic, hypnotic mood.

Jake Gyllenhaal embeds two great performances into this gripping environment at once. Both as a bored college professor and as a somewhat cocky actor, Gyllenhaal is completely convincing. How well he plays becomes clear at the latest when the different personalities of his two characters seem to mix and there is no longer a clear demarcation between the two characters. Gyllenhaal is supported by three strong actresses at once, with M&eacute;lanie Laurent (Inglorious Basterds) in particular leaving a lasting impression. Visually, atmospherically and acting-wise, then, Enemy is quite great cinema.

However, the film also has one very big problem that not all viewers will be able to overlook. It is impossible to understand the story at first go. And even prolonged reflection will, at best, reveal conjecture and daring theses. Certainly, Villeneuve keeps his film deliberately cryptic and wants to make his audience think and philosophize. And there may be some viewers who find the solution to the whole thing in the spider symbolism that runs through the film and don't scratch their heads in confusion when a giant spider is suddenly visible above Toronto, only to disappear again immediately afterwards. Also, there might be an important clue hidden in the topic of the lecture Adam gives at the beginning of the movie. Still, the whole thing is so impenetrable at times that it might deprive some of the enjoyment of this top-notch psychological thriller in terms of its craftsmanship.

Although the final image burns itself into the memory in the long run, the surreal nature of Enemy ends up being more disturbing than intriguing. Despite many quiet moments, the film is very suspenseful, but offers no resolution, and thus no redemption. As such, the work is intellectually satisfying, while being completely unsatisfying purely from an entertainment standpoint. It's an absolutely unadjusted and very special work, which will divide the minds extremely. And that's why it's worth seeing only for those viewers who love the opaque and the surreal, and who don't mind if at the end of a film there are actually only question marks left.

Cinema trailer for the movie "Enemy (Kanada/Spanien 2013)"
Loading the player ...