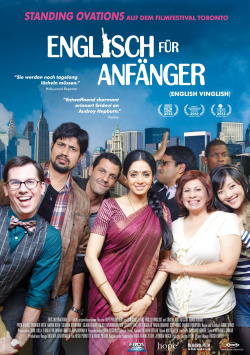 Shashi Godbole (Sridevi) is tired of her husband Satish (Adil Hussain) and children always teasing her about her lack of education. Most especially, her daughter Sabna (Navika Kotia) apparently finds it extremely funny that her mother doesn't speak a word of English. When Shashi is asked by her sister Manu (Sujatha Kumar) to help her prepare for her niece Radha's (Priya Anand) wedding in New York, the housewife is initially a bit scared. After all, travelling to the US completely without knowing English is definitely not going to be easy. But once in the foreign country, she decides to make a virtue out of her misery. She secretly attends a language course, with which she also wants to finally win the respect of her family again. And indeed, not only her English improves, but also her self-esteem. But what Shashi didn't count on is the interest that another language student, French chef Laurent (Mehdi Nebbou), takes in her - and that she likes it too.

The idea behind English for Beginners is really quite nice and is full of comedic, dramatic and romantic potential. The mixture of Bollywood drama and culture-clash comedy has many charming approaches, which in principle not only Bollywood fans could enjoy, despite the inevitable dance and song interludes. But in the end, unfortunately, the sometimes really bad clichés and predictable plot elements dominate over wit and charm, which is intensified by the far too long running time of over two hours.

Bollywood icon Sridevi, who makes her comeback with this film after a long family hiatus, gives the shy housewife, who suffers from the constant teasing of her family and seems to be terrified of everything and everyone in a foreign land, without any form of subtlety, which however makes her performance a perfect match for Gauri Shinde's direction. Especially in the moments when Indian and American cultures collide, Shinde just lashes out with the cliché hammer, which reaches its almost embarrassing climax in the drawing of the gay language teacher. Sure, somehow not only the teacher but also all the participants of the language course are very likeable and one definitely feels the desire to spend more time with them. But this pleasure is hardly granted to the viewer. Instead, Shashi has to repeatedly evade her family's lack of understanding or deal with rude Americans, always with the frightened look of a deer shocked by the headlights.

The whole thing then culminates, how could it be otherwise, in a speech dripping with morals and colorful dancing. All the conflicts that would have led to a very different resolution in real life more or less dissolve into nothingness afterwards. Surely, if you like Bollywood cinema, you will experience real feel-good cinema here too. It's not for nothing that English for Beginners was one of the most successful Indian films ever in 2012. But for Bollywood-unexperienced viewers, the numerous clichés and the almost complete lack of subtlety in the staging and acting of the actors make it very difficult to get carried away by this language course. Therefore: only for fans worth seeing!

Cinema trailer for the movie "English for Beginners (Indien 2012)"
Loading the player ...