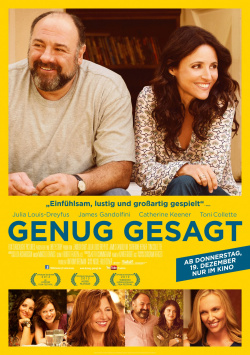 Actually, therapeutic masseuse Eva (Julia Louis-Dreyfus) is perfectly content with her life as a single mother. But with her daughter moving away to college, she's facing a drastic change that Eva isn't exactly looking forward to with much anticipation. In this situation, she meets the good-natured Albert (James Gandolfini), who may not be the type of man Eva would be interested in on the surface. But his disarming humor and the fact that he is in a very similar life situation lead Eva and Albert to become closer and closer. At the same time, she also befriends her new client Marianne (Catherine Keener), who seems to be right on her wavelength. Everything is going perfectly for Eva. But what she doesn't suspect is that Marianne is Albert's ex, and the more she opens up to the two of them, the more she puts her new relationship and her new friendship at risk in equal measure.

With Enough Said, filmmaker Nicole Holofcener stays true to the tragicomic style of her previous films. Like Friends with Money or Please Give, Enough Said is laced with moments of somewhat quirky comedy and true-to-life drama. Quiet situation comedy and pointed wordplay make this unusual love story a very charming work, carried by a great ensemble of actors. As good as lead actress Julia Louis-Dreyfus (Seinfeld, Veep) and her co-stars Toni Collette and Holofcener's regular Catherine Keener may be, the one who undoubtedly gets the most attention is James Gandolfini, who passed away far too soon in 2013 and is seen here in one of his final roles. Gandolfini delivers an incredibly endearing and sympathetic performance that shows just how versatile the Sopranos star had been. And as a result, it's also very easy for viewers to understand why Albert grows so fond of Eva so quickly.

However, the fact that Albert becomes the film's big sympathetic character also brings with it a big problem. For Eva, at one point, doesn't act very nice towards him. More specifically, she outright exposes him in one of the film's most uncomfortable scenes. The fact that her humiliating behavior is just a sign of her own emotional inadequacies doesn't help her much. In that moment, she simply squanders much of the sympathy that viewers may have previously felt for her. Sure, Eva is a rather dysfunctional character to begin with. But up until this scene, her flaws were still quite endearing in a way. Here, however, she displays character traits that not only Albert, but the viewer as well, finds hard to forgive. And with the sympathies, of course, the interest in this character and her story decreases significantly, from which the entertainment value of Enough Said has to suffer noticeably in the last third.

That there are anyway many badly worn, somewhat tough moments, in which neither the humor of the script, nor the charm of the production really want to ignite, is not exactly helpful. That doesn't make the film bad at all. Enough said simply has too many positive aspects to offer. The strong cast and some truly wonderful moments of restrained, but all the more effective comedy keep the story from drifting into total irrelevance. Still, even though there are clear qualities, it lacks the crucial elements to make Enough Said more than just nice entertainment for lovers of American independent cinema. And that's why it is unfortunately only enough for a bottom line: with deductions worth seeing!