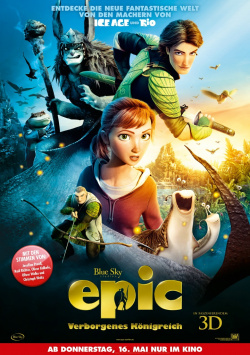 After the death of her mother, 17-year-old MK (voiced by Josefine Preuß) must move back in with her father, the eccentric Professor Bomba, at her childhood home in a remote forest. She hopes to finally rebuild a closer relationship with her estranged father, which she desperately needs now in times of her grief. But as before, her father only has eyes for his forest. He's convinced that there's a world there that just doesn't register with our superficial gaze. Bomba has been talking about miniature people and talking animals for years now, which was also a reason for her separation from MK's parents. The girl is convinced that she is better off on her own. But just as she's about to leave again, she's drawn into an incredible adventure. For suddenly MK is tiny and must fight alongside the quick-tempered Nod (Raul Richter), the two talking snails Mub and Grub (Oliver Kalkofe and Oliver Welke), and the great warrior Ronin, leader of the Leafman, to prevent the kingdom of Moonhaven, hidden in the forest, from being destroyed forever by the evil Mandrake (Christoph Waltz). Only by saving Moonhaven can she return to her world - but time is running out for that rescue, and Mandrake and his minions seem to hold all the cards.

Based on a children's book by William Joyce, director Chris Wedge (Ice Age) takes his audience into a mysterious fantasy world with Epic - Hidden Kingdom, which he and his team have made visually fantastic. This side of the forest, which can't actually be perceived by humans, is full of magical details that are sure to amaze little moviegoers in particular. Technically, this animated film is an absolute success. Even if the obligatory 3D roller coaster effects have long since lost their appeal and somehow just seem unimaginative, the realm that is designed here is still really beautiful to look at.

The problem Epic - Hidden Kingdom has to contend with is its story and its implementation. Instead of developing something entirely its own here, the film seems blithely cribbed from other machinations. From Avatar to Spiderwicks to Lord of the Rings, you constantly feel reminded of films like these here. Children may not notice this. But anyone who knows a little about the fantasy genre will quickly realize that the only thing truly epic about Epic is the audacity with which the makers have borrowed from other works.

Besides that, the story, with its overcautious political correctness and not-so-subtle eco-message, presents itself as strangely devoid of humor, while also lacking heart, warmth, and magic. Only the two snails Mub and Grub, who are wonderfully dubbed by Oliver Kalkofe and Oliver Welke, provide really good laughs and lovingly amusing moments. The film could have used a lot more of that.

For very young children, the action is too dark, especially at the beginning, but small animated film fans from 8 years should have a lot of fun with the fantastic forest adventure. But to have a similar success like the Ice Age movies, this film simply lacks likeable characters and own ideas. For an entertaining cinema afternoon with suspense, some fun and a lot of morals, this is perfectly sufficient - but nothing more. Therefore: for children, for whom great 3D effects and simple gags are even more important than a good story, definitely worth seeing. But for everyone else a real walk in the woods is clearly preferable!