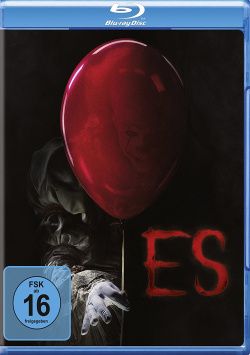 Film: The small town of Derry in Maine in the 1980s: The idyllic façade of the town is shaken to its foundations as some children disappear. It's not the first time the city has been terrorized by a mysterious disaster. Every 27 years, evil crawls out of the depths of the sewers to haunt the city's children. But this time Es (Bill Skarsgård) doesn't have such an easy game. Because seven friends, all of them outsiders, who call themselves "club of the losers", face together the evil that appears to them in the form of the clown Pennywise. But to defeat it, the children would first have to face up to their deepest fears…

One thing, perhaps: Since my youth I've been a big fan of Stephen King's books. I've read everything King has written, with a few exceptions. Some of his works I have even taken to hand several times. And "Es" undoubtedly belongs to it, because after "The Stand" it is my very personal King favourite. Because of my fondness for these books and my passion for cinema, I am always happy when a new King filming is announced, always hoping that it could capture the spirit of the original. Because there are some really great adaptations of the horror master's stories, like "The Convicted", "Stand by me", "The Green Mile" or "The Shining". But on the other hand, there are also many films that make use of Stephen King's oeuvre, which are simply and touchingly murky.

"Es" was already filmed as a two-parter for American television in 1990. Even though Tim Curry was really great as Pennywise and director Tommy Lee Wallace did some of the elements of the book well, the limits set by the TV format alone prevented this adaptation from even approaching the book. True Detective" mastermind Cary Fukunaga wanted to change that with his two-part cinema version. But after an intensive planning phase Fukunaga left the project (or was dismissed), which is generally not a good sign. For him Andy Muschietti took over the helm, who could land a surprise success in 2013 with the horror movie "Mama".

He adhered to the concept that this cinema version of "Es" would be told in two parts. The first chapter tells about the events of the "Loser Club", part 2 will send her 27 years later as an adult into the fight against Pennywise. The fact that the action isn't like in the book in the 1960s, but takes place at the end of the 80s, doesn't bother at all, especially since the makers succeeded in giving the film a harmonious 80s feeling on the one hand, but at the same time make it look very timeless. The friendship of the seven children seems absolutely real, their conversations absolutely authentic and their fears universally comprehensible.

The child actors are really great and it's already clear that their adult counterparts will have a hard time capturing this very special chemistry between friends as credibly as the young actors did. But of course the real star of the movie is Clown Pennywise, wonderfully scary personified by Bill Skarsgård. With his demonic grin, with which he already annoyed his younger brother as a child, the native Swede provides for some perfect shock moments. Here the sound effects could have been used more discreetly. Because it doesn't really need them to be scared or to get scared of Pennywise.

Besides the too intrusive sound effects, the use of CGI in some places is also not quite convincing. But that is whining at a high level. Because with a few small compromises "Es" is an all around well done adaptation of a part of the book and is already one of the best Stephen King adaptations ever. It's a horror movie that offers good shocking moments, but also tells a thrilling story about the loss of innocence and the power of true friendship. I am already looking forward to 2019, when part 2 will be released in the cinemas. Absolutely worth seeing - but nothing for weak nerves!

Picture + sound: Even in the numerous dark sequences, the Blu-ray image is convincing with its high sharpness of detail, atmospheric colours and coherent contrasts. The sound delivers some really excellent horror surround moments, especially in the Dolby Atmos mix, but not only the louder effects, but also small ambient noises and dialogues come to the fore very well. Very good.

Extras: It has been known for quite some time that a director's cut of the film will probably be released in the foreseeable future. Whether there will be more extras in addition to this is of course still in the stars, but it can be safely assumed. The cinema version offers a short documentary about Pennywise and his actor Bill Skarsgård (ca. 16:26 min.), about the club of the losers (ca. 15:42 min.) and about author Stephen King (ca. 13:50 min.), who has interesting stories to tell about the creation of the novel. In addition, there are about 15 minutes of edited scenes, which also include a not very serious alternative beginning. Not really much, but everything is well worth seeing!

Fazit: Chapter 1 of "It" is one of the most successful horror movies of all time. Since Andy Muschietti already reported some time ago that a longer version of the film is to be released, you should consider carefully whether you would like to use the cinema version now or would rather wait for a directors cut. The Blu-ray presents the film in very good picture and sound quality and also has some worth seeing extras on board. Therefore there is also here quite clearly one: absolutely recommended!