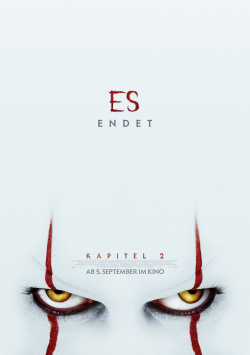 27 years have passed since the Losers Club fought ES in the form of Pennywise the Clown (Bill Skarsg&aring;rd). They thought they had defeated ES - but now ES is back. Bill (James McAvoy), Beverly (Jessica Chastain), Richie (Bill Hader), Ben (Jay Ryan), Eddie (James Ransone) and Stanley (Andy Bean) have long since left Derry and can't remember what happened 27 years ago. But a phone call from Mike (Isaiah Mustafa), the only one who has remained in the small town, brings back all the memories of the horror from their childhood. Now the members of the Losers' Club must make good on their vow of old and meet in Derry to defeat ES once and for all - but Pennywise has some bloody trump cards up his sleeve.

The first half of the film adaptation of Stephen King's cult novel advanced to become the most successful horror film of all time two years ago. With a budget of just $35 million, the film managed to gross over $700 million worldwide. So it's no wonder that expectations for Part 2 are enormously high. I'm deliberately avoiding calling It - Chapter 2 a sequel, because it's more like the second half of a long story. It's just that director Andy Muschietti tells the two parts of the story more clearly separated from each other than Stephen King, who kept jumping back and forth between the two time levels in the book.

While Muschietti keeps weaving in little flashbacks to the protagonists' childhoods in Chapter 2, the clear separation of the two plot levels is still evident here. And that, then, might be the film's biggest problem. It - Chapter 1 worked so well precisely because it's not just a creepy horror movie, but also a nice coming-of-age story. That element is almost completely missing from the second chapter. The fact that the protagonists are now adults also means that the fight against Pennywise isn't really scary anymore. The whole thing is exciting and there are also a few successful scare moments. But comforting creepiness just won't happen.

Nearly perfect is the cast. James McAvoy and Jessica Chastain may be the most familiar faces in this, but it's Bill Hader who steals the show as the adult Richie. The adult losers harmonize almost as well as their younger counterparts. This is incredibly important to the impact of the story. Especially when they are all on screen together, the movie works really well. It doesn't bother Muschietti that he overdoes it a bit with CGI effects and that he overdoes it especially in the finale. However, King didn't make it easy for him, because there are some moments in the book that are almost unfilmable. Andy Muschietti has found good ways to transfer the whole thing very successfully to the screen.

It - Chapter 2 is not quite as successful as the first half of this book adaptation. All in all, though, it's a well-rounded and entertaining conclusion to the story. At the same time, Muschietti doesn't shy away from using some whimsical and delightfully absurd imagery at times. For this, for the great cast, for the nice appearance of a surprise guest and for the fact that it has succeeded in transporting the very special atmosphere of the book on the screen, there is despite minor weaknesses a clear: Absolutely worth seeing!!!