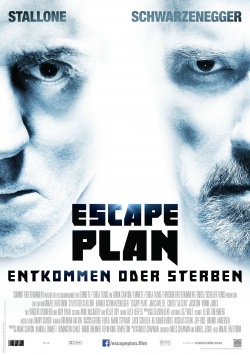 What was only a dream for many action fans in the 1980s has already come true in a small way in the Expendables films: the two genre icons Arnold Schwarzenegger and Sylvester Stallone side by side in a joint film. After the small appetizers, Escape Plan finally brings the action heroes together in a feature-length encounter. Directed by Mikael H&aring;fström (Room 1408), the onetime rivals must team up to solve an almost impossible task - escaping from a state-of-the-art, high-tech prison.

Ray Breslin (Stallone) is a highly decorated security expert who repeatedly gets himself locked up undercover in prisons to put their security through its paces. And so far, in every prison, he's managed to find the weak link in the system and escape. But one day he is faced with a very special challenge. He receives an order from the CIA to get himself locked up in a new, top-secret, high-tech prison called The Tomb. The catch: his otherwise well-informed team is not allowed to know the location of the prison and he has to start an escape attempt on his own. Against all reason Ray agrees to the offer - with fatal consequences. The mission turns out to be a trap and Ray suddenly finds himself at the mercy of the sadistic prison warden (Jim Caviezel) and his brutal henchmen (including Vinnie Jones). With contact with the outside world completely impossible, Ray must search for allies inside the prison to escape this hell. The obscure Emil Rottmayer (Arnold Schwarzenegger) seems to be the only one who comes into question. But even with combined forces, there is apparently no way for the men to escape this tomb.

Escape Plan is nostalgia worthy in the best sense of the word. True, the production itself seems anything but dusty. But the dramaturgical structure and the action scenes could also have been taken from 80s and 90s action thrillers like Fortress with Christopher Lambert or Lock Up with Sylvester Stallone. It may be that this seems a bit dusty in times when Fast & Furious tempo rather sets the tone in action cinema. But for the interaction of the two action icons Stallone and Schwarzenegger the makers could not have chosen a better film. The two fit perfectly into their roles, into the story and into the whole atmosphere of the prison thriller. And if they then also deliver a tangible duel, then minor weaknesses such as logic holes or unintentionally funny scenes are quickly forgotten anyway.

Mikael H&aring;fström has directed a very entertaining action thriller, which is fully tailored to its main actors. There's no great depth of character required, no overly intricately constructed story or extremely expressive facial expressions. Rather, the stars are supposed to flex their muscles, show a little self-mockery given their advanced age and punctuate the neatly staged action sequences with pithy lines. And on this level Escape Plan can fully convince. In addition, with Jim Caviezel a good antagonist was found, who only at the end runs the risk of letting his character become a caricature of a typical movie villain.

While some effects seem a bit trashy and some scenes a bit unintentionally silly. But overall Escape Plan offers really good entertainment for all friends of the more traditional action movies. If you have ever dreamt of Stallone and Schwarzenegger beating each other up, you shouldn't miss this movie. But also, who just likes simple action fare of the old school, can't miss this movie. Worth seeing