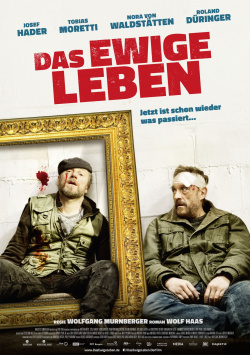 It took a long time, but six years after The Bone Man, the word is finally out: Now something has happened again - and former inspector and failed private detective Brenner (Josef Hader) is finally back on the job. Not entirely voluntarily, though. For when he has hit rock bottom in every respect, he has to return to his old hometown of Graz, where he moves into the completely run-down house of his long-dead parents. But here again, Brenner seems to be magically drawn to crime. After a meeting with his childhood friend Köck (Roland Düringer), Brenner ends up on the floor of his kitchen with a bullet in his head. Has he tried to take his own life during one of his unbearable migraine attacks? Or is police chief Aschenbrenner (Tobias Moretti), another friend from another life, behind the attack? When Brenner awakens from a brief coma, the Köck has been murdered and Brenner is the prime suspect. Now he has no choice but to face the sins and ghosts of his past in order to prove his innocence and still get out of this situation alive...

The Eternal Life is now the fourth film adaptation of a Brenner novel by Wolf Haas. Once again Wolfgang Murnberger sat in the director's chair and Josef Hader slipped again into his parade role as grumpy ex-cop. So the ingredients are proven good - and yet the film leaves a somewhat disappointing impression. Surely, even a weak burner is in many moments still better than many other machinations that find their way into the cinemas. And there are enough wonderful scenes that make the visit to the cinema worthwhile for all those who already liked the first three film adaptations. But especially in comparison to the great Bone Man, the film version of the 2003 novel lacks some of the special standout features that made the previous Brenner adaptations stand out so clearly from the crowd.

This starts with the story. It is, from some delightfully quirky moments and dialogue laced with dry wordplay, quite conventional after all. Certainly, there is an aspect - which of course should not be revealed here - that clearly shows the handwriting of author Wolf Haas and that can not necessarily be called a common crime dramaturgy. Nevertheless, the big surprises in this story linked to Brenner's past are missing. Moreover, there is simply no Berti, who proved to be a perfect sidekick for Brenner in the last movies even when his appearances were rather short.

Surely, it is always good in itself when a story and its characters also develop further in the course of different movies or books and not only variations of known motifs are offered. In this respect Das ewige Leben is a consistent continuation of the series, especially in its unsparing treatment of the character of Brenner. Nevertheless, Das ewige Leben does not have the high entertainment value and the wonderfully unadjusted moments of surprise of its predecessors. As a crime drama infused with light humor and bleak dreariness, however, the film still works very well. And even when it's not at its best, it's always nice to see Brenner on screen thanks to the wonderful Josef Hader. For this there is then, with slight deductions, also a clear: Worth seeing!

Cinema trailer for the movie "The Eternal Life (Österreich/Deutschland 2014)"
Loading the player ...