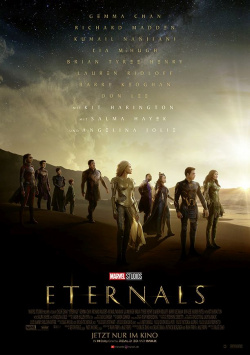 Once created by the Celestials, the Eternals were sent from the planet Olympia to Earth to protect humans from the Deviants, a race of interstellar predators. For many hundreds of years now, the Deviants have been exterminated and the Eternals wait to return to Olympia. But then Deviants reappear and the end of humanity seems imminent. Now the Eternals, now scattered across the globe, must reunite to protect the planet. But in the process, a truth is revealed to them that casts the meaning of their existence in a whole new light and forces an intangible decision from them...

With "Eternals", several new characters are added to the MCU in Phase 4. Oscar winner Chloé Zhao ("Nomadland") has taken on the difficult task of introducing ten (strictly speaking, eleven) new characters to the MCU while also telling an epic story. Visually, she succeeds very well, as "Eternals" looks great at many moments. In addition, Zhao has managed to give it a very unique feel, which sets this film apart from the other entries in the Marvel cinematic universe. But unfortunately, that's where the positives stop.

The quite honourable attempt to make the cast as diverse as possible also results in some logic holes. For instance, if omnipotent creators like the Celestials create superheroes, why do some of them (at least in the original English version) speak with Spanish or Scottish accents? Why can one of them only communicate via sign language - which was as unknown to humans thousands of years ago as the English language the Eternals use to communicate with each other? And why is one of them sent to Earth in the body of a child?

Well, these are all things that could be overlooked if the characters were better fleshed out and - and this is the second major weakness - if the story were more exciting. Yes, there are some well done surprises and quite rousing action sequences. But otherwise the story remains very uneventful. The big threat that is constantly talked about never really becomes tangible. One never really has the feeling that humanity is really in danger, which is why there is never any real tension.

"Eternals" has strong moments, a great ensemble and a partly really fascinating visual language. However, this is countered by a rather tensionless story and not enough fleshed out characters. In the end, the film is ambitious, but on balance rather one of the weaker contributions to the MCU. The only thing that really makes you want more is the second of the obligatory end credits scenes, in which the beginnings of a character very popular with comic book fans are teased. All in, for the "Eternals" I have to lower the "absolutely worth seeing" to a "worth seeing" for me as an MCU fan and add another "with reservations".