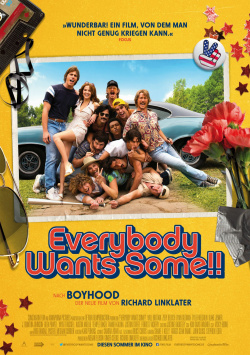 Summer 1980: In a few days the new semester at the university begins. For Jake Bradford (Blake Jenner), this marks the start of a whole new chapter in his life. With only a few clothes, books and a box of records, he moves into his new home in the student housing provided for the members of the college baseball team. With his new roommates and teammates, Jake is now expected to spend the next few days preparing for classes and the next baseball season. But the guys are more in the mood for girls, parties and marijuana. So Jake and his new buddies begin a few very exuberant hours full of fun and music and when he then also meets the attractive actress student Beverly (Zoey Deutch), studying is no longer to think of. But the carefree holidays are fast coming to an end and it's time to grow up.

In 1993, Richard Linklater's film Confusion - Summer of the Freaked Out told the story of a teenage group's last day of school in 1970s Texas. Linklater cast the film, whose original title Dazed and Confused came from a Led Zeppelin song, with a largely unknown cast at the time, including future Oscar winners Ben Affleck and Matthew McConaughey. The film wasn't so much about telling a deep story as it was about capturing the feel of life at a particular time. That's what the comedy named after the Van Halen song Everybody Wants Some!!! is also about. Again, it looks at an incisive period in young people's lives, again, largely unknown actors have been cast, and again, there is only a very thin plot framework.

It's very well done by Linklater, who also sees his latest film as a quasi-sequel to his critics' favourite Boyhood, to transport the 80s back to the screen. The soundtrack, the hairstyles of the actors, the clothes and also the color scheme of the film create an all-around authentic image. Still, it lacks a bit of that very special flair that made Confusion - Summer of the Freaked Out so entertaining and a cult film over the years, despite the barely existing story. At the beginning, the whole thing works really well and is also an enormous amount of fun. But in the long run, the not exactly profound conversations of the protagonists then start to bore a little.

There is no question that Linklater has hit the bull's eye again in terms of atmosphere. As a viewer you really have the feeling to be back in the 80s. If this wonderful feeling of warm nostalgia is enough for you, you should definitely not miss it. But if you're expecting a real story and want to be taken in by the characters, you'll be looking at the clock again and again after an hour at the latest, bored. But if you like Linklater's work in general and Confusion - Summer of the Freaks in particular, then it's worth seeing

Cinema trailer for the movie "Everybody Wants Some!! (USA 2015)"
Loading the player ...