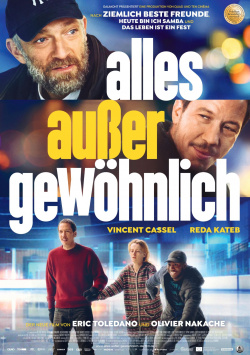 Bruno (Vincent Cassel) lives for his work. Not a minute when he's not on the phone or caring for up to 40 children with severe autism through his nonprofit organization. Even with former patients long since grown, Bruno can't say no when they ask for his help. His good friend Malik (Reda Kateb) also works in such a facility, but has to deal not only with young patients, but also with inexperienced staff. But the two men are not intimidated by this. It gives them strength to be able to help others. But then Bruno receives a visit from employees of a commission that is supposed to examine whether his organization is allowed to continue working at all.

With their new film Everything Except Ordinary, directors &Eacute;ric Toledano and Olivier Nakache (Pretty Best Friends) have fulfilled a real heart project. In the drama, they pay tribute to a friend, St&eacute;phane Benhamou, and his association Le Silence des Justes (Eng: The Silence of the Just). Since 1996, Benhamou has devotedly worked to welcome and integrate autistic children and young people. Toledano and Nakache had already made an image film for the association, during which they also met the educator Daoud Tatou. Tatou and Benhamou's work impressed the two filmmakers so much that they were eager to make a film about them.

For two years, they then studied the two associations, Le Silence des Justes of St&eacute;phane Benhamou and Le Relais &Icirc;le-de-France, which by then was headed by Daoud Tatou, and drew from them the material for their latest work. And so the film ends up not so much telling a clear story as reflecting the work of the people who work in organisations like these. It's well-intentioned and, in places, quite involving. But in its attempt to lift the whole thing from a documentary to a dramaturgical level, the film gets increasingly lost in a jumble of characters and clichés, making it extremely difficult for the viewer to relate to the characters and their stories.

The directing duo has tried to do too much and ultimately failed to do just that. Showing the hurdles that associations like Le Silence des Justes face is as good and important as revealing the importance of the work people do, day in and day out, against the mills of bureaucracy as well as prejudice and exclusion. But as much as the film has its heart in the right place, it doesn't really succeed in adequately conveying the good message due to sometimes completely unnecessarily overstuffed staging. Well-intentioned, but still only worth seeing with limitations!

Cinema trailer for the movie "Anything but Ordinary (Frankreich 2019)"
Loading the player ...