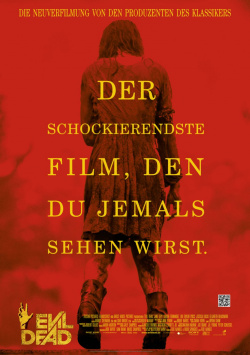 In 1978, friends Sam Raimi, Bruce Campbell, and Robert Tapert went to a wooded area in Michigan with a camera and $1,600 in their pockets, where they shot the short film Within the Woods in a farmhouse. This not only laid the foundation for their own careers, but also for a very popular horror franchise. For a short time later, Raimi was able to direct the long-form story with a significantly increased budget of just under $375,000, with Tapert again involved as producer and Bruce Campbell as lead actor and co-producer. The result was called Evil Dead, a classic horror film that was quickly confiscated and placed on the Index in Germany due to its rather drastic depiction of violence.

Two more sequels followed, Evil Dead 2 and Army of Darkness, which turned out to be considerably more humorous and turned main character Ash into one of the horror genre's all-time great cult figures. Although Sam Raimi has now specialized in more family-friendly entertainment with blockbusters like the Spider-Man films, fans have not given up hope that he will one day return to the dark forest with Ash and open the Book of Death once again. While that hasn't happened yet, at least Raimi, Campbell, and Tapert have teamed up to produce a remake of their classic.

Taking the helm is Fede Alvarez, whose version of Evil Dead marks his feature-length debut. Shot in Auckland, New Zealand on a hefty budget of $17 million, this 2013 version of the horror classic isn't strictly speaking a direct remake, but it's not a classic sequel either. Rather, it's a very similar story in the same universe, peppered with plenty of neat references to the original, while also going its own way throughout. At its core, the story remains the same: David (Shiloh Fernandez), Olivia (Jessica Lucas), Eric (Lou Taylor Pucci) and Natalie (Elisabeth Blackmore) take David's drug-addicted sister Mia (Jane Levy) to a remote cabin in the woods, where Mia is supposed to be detoxed for good under the supervision of her friends. But drug withdrawal quickly turns out to be the lesser problem when the group find a mysterious book in the basement of the house, through which they unknowingly awaken evil demons. A battle against evil begins, fought in a particularly bloody way.

Evil Dead gets a lot of things right that most contemporary horror remakes get wrong. Fede Alvarez has eschewed computer effects almost entirely in favor of practical effects, makeup, and prosthetics as a priority. And it works very, very well. Even hardcore horror fans might get a little sick to their stomach during some scenes. Supported by a coherent atmosphere and camerawork that is strongly based on the original, Evil Dead offers truly excellent horror entertainment, at least visually. And also the actors have to be praised at least partially. Because while especially Elisabeth Blackmore remains completely pale and interchangeable, Jane Levy (Suburgatory) delivers a really first-class performance for this genre as a young woman fighting drugs and demons.

Despite this, the script only manages to a limited extent that you as a viewer really care about the rather interchangeable characters. True, even in the original, the characters were already interchangeable and didn't necessarily have any depth of character. Alvarez took the chance to remedy this shortcoming with his altered storyline only with Mia, but not with her co-stars. And since he puts more emphasis on building a backstory, especially at the beginning, than was the case with Raimi's film, the one-dimensionality of his characters is of course much more obvious.

Besides that, Evil Dead is not only a successful remake (or rather a successful reinterpretation), but also a really good horror film, which almost completely dispenses with humor and instead tries to shock with extreme harshness and quite a lot of blood. Fans of the original will discover many small references to the cult film and should definitely stay in the cinema until after the credits. If you're looking for a good story and fleshed out characters, you won't enjoy the carnage much. But if you want to enjoy an old-school horror movie again and are already hardcore, you shouldn't miss the 2013 version of Evil Dead. Worth seeing