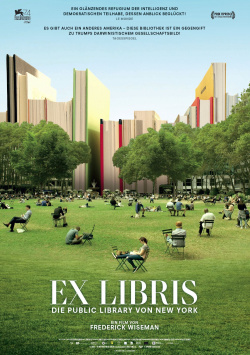 The New York Public Library is the cultural heart of the city. With over 51 million media, the building, which opened in 1911, is one of the largest libraries in the world. But it's not just books that are collected here and made available to the public. The New York Public Library is a place of learning, education and experience. Documentary filmmaker Frederick Wiseman captured everyday life at the library's headquarters and its branches in the Bronx or on Staten Island on camera. The result is Ex Libris - The Public Library of New York, a documentary of over three hours about one of the most important institutions in the metropolis of millions.

Wiseman captures only snapshots, with no commentary. The award-winning filmmaker has remained true to this style for four decades now. He lets images, not protagonists, do the talking. Thus, his latest work does not focus on a specific figure, such as the head of the library. One looks in vain for interviews or an explanatory voice from off-screen. Although this takes some getting used to, it also conveys a more authentic image of the institution portrayed. Thus, in his 42nd documentary, Wiseman takes viewers behind the scenes, observing staff as they advise customers on the phone, as they sort books, research archives, or engage in discussions about how to generate new donations or how the library must change in the digital age.

You're also an observer at numerous events such as career advice sessions, book launches by musician Elvis Costello and others, socio-political talks or concerts. There are trips to the large newspaper and picture archive, relaxation in Bryant Park adjacent to the library, and brief snapshots of library users. In this completely unexciting way, Wiseman not only gives a very good impression of the size of the library and all the various things needed to keep the day-to-day operations running smoothly.

He thus also shows how important such an archive of knowledge is for democratic coexistence in a country like the USA. In some moments, the film thus also becomes socio-politically relevant and stimulates intense reflection. Even if some moments drag on and perhaps one could have done without one or the other excerpt from rather dry lectures, Ex Libris - The Public Library of New York has become a fascinating, rousing film, which is really worth seeing not only for literature enthusiasts - provided that you also have good seat meat in addition to the interest in the library!