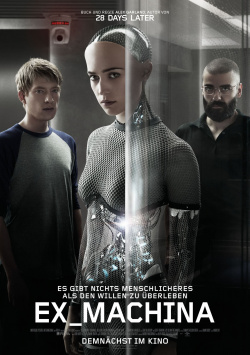 Unassuming programmer Caleb (Domhnall Gleeson) can hardly believe it: he, of all people, has been drawn to spend a week at the secluded retreat of his boss Nathan (Oscar Isaac), the eccentric CEO of the world's largest Internet company. But when he arrives, it quickly becomes clear that he hasn't been invited here to take a vacation. Rather, Nathan has chosen him to participate in a revolutionary experiment. The billionaire, who lives in complete isolation, has succeeded in creating the world's first truly artificial intelligence, which he has integrated into the body of the robot girl Ava (Alicia Vikander). Caleb is tasked with extensive sessions to find out if he can actually take Ava's humanity from her. But he has no idea what a dangerous game he's getting himself into...

Until now, writer Alex Garland has only made a name for himself as the screenwriter of films like 28 Days Later, Sunshine and Dredd. For the realization of his latest screenplay Ex Machina, he has not let himself take a seat in the director's chair for the first time. The fact that this sci-fi chamber play is his directorial debut is hardly noticeable in this visually and dramaturgically magnificent film. With engaging aplomb, Garland manages to keep the audience hooked on the story. Although there are basically only three actors who carry the film and the action takes place mainly in a very limited space, Ex Machina feels big and exciting.

This is partly due to the visual language, which is a mixture of fascinating location and visual effects perfectly integrated into it. A hotel and accompanying private estate in the middle of the Norwegian wilderness was chosen as the filming location, and the set designers had to change very little to transform it into Nathan's Alaskan estate. The combination of stylish, at times almost futuristic architecture and the raw, untouched wilderness makes for a very unique atmosphere that is both oppressive and fascinating. As for the effects, it's easy to forget that much of Ava's body was created on a computer, at least at the beginning of the film. From the beginning Ava is a fascinating, very human character, which is so believably realized that you as a viewer can well understand why Caleb develops feelings for the robot girl.

But the film can convince not only on its visual and trick-technical level. Also dramaturgically very interesting, exciting and intelligent fare is offered here. Certainly, for whom good entertainment cinema is determined by a lot of action and bluster, the rather leisurely staged treatise on the question of what constitutes humanity, will be difficult to make friends with. But if you love deep genre cinema, you will soon realize that Alex Garland has really created a small masterpiece here. The three main actors are also convincing. Domhnall Gleeson is perfectly cast as a slightly naive nerd, he is not only very believable in this role, but also extremely likeable. And that is of immense importance, especially for the finale. Oscar Isaac, who like Gleeson will be seen in the new Star Wars, gives the eccentric hermit just wonderfully. At times a sidekick, at times a terrifying psychopath - Isaac is convincing all along the line, and along the way delivers what is probably the most bizarre dance number in recent years. And finally there is Alicia Vikander, who embodies Ava with a mixture of vulnerability, childlike naivety and inscrutable calculation. A near-perfect trio who are simply quite a pleasure to watch.

Not too much should be said about the final act here, of course. However, it must be attested to Garland that - even if he could have gladly ended the film a minute or two earlier, since the final scene isn't really necessary anymore - he chose a very good, consistent ending, which also contributes to Ex Machina standing out from the crowd and sticking in the minds of many viewers for even longer. At last, a truly original work that is not a novel adaptation, remake, sequel or prequel, but tells a story that may not be entirely new, but is nonetheless engaging and self-contained, with depth. In contemporary entertainment cinema, that has sadly become a rarity. But then this has more than earned an Absolutely Worth Seeing!!!