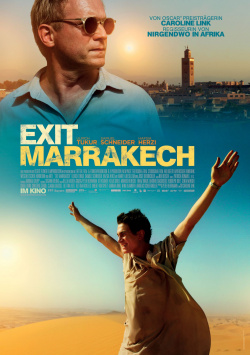 Twelve years after her Oscar winner Nowhere in Africa, award-winning filmmaker Caroline Link has returned to the African continent. From there, Morocco to be precise, she once again tells a moving story against a fascinating backdrop. At the center of the action is 17-year-old Ben (Samuel Schneider), who is supposed to spend the holidays with his father Heinrich (Ulrich Tukur), a celebrated theater director, in Marrakech. Ben is less than thrilled about this, as his father is even more of a stranger to him than Morocco. But while the time he spends with Heinrich tends to only further alienate father and son, Ben becomes more and more enchanted by the unknown world Marrakech reveals to him. When he falls in love with the beautiful Karima (Hafsia Herzi), the boy makes a bold decision: he follows the young woman to her remote home village, hoping to get to know the country, the people and their culture better. In the process, he completely forgets to check in with his father. When his father goes in search of his son, they both embark on a journey that will not only take them through a foreign country, but will also point them in the direction of their future relationship.

Exit Marrakech is a film about different cultures and especially about different images of family. On the one hand is Ben's dysfunctional family. His parents are divorced, he and his father are complete strangers and rapprochement seems almost impossible. On the other side is Karima's family. Here there is a close cohesion and although as a woman she suffers forms of oppression from society - and thus also from her father - it is a matter of course for her to give her earned money to the family. The togetherness Ben experiences with Karima's family is completely foreign to him, but at the same time, she could never understand how little the boy cares about getting to know his father or even his half-sister better.

Interesting is also the exploration of cultural contrasts. How much sense does it make to bring what we consider high culture to a country that sees the world through very different eyes, has different values and concerns? Especially at the beginning this question is raised, which could have been deepened a bit more. But more and more the father-son story becomes the focus and in the last third all other aspects of the story are almost completely faded out. The film is impeccably crafted, very well acted and beautifully filmed. There's no question about that. But especially after Nowhere in Africa and In Winter One Year, one would have expected a film with a similar emotional impact from Caroline Link. And that is sadly missing here.

The story Link tells here is beautiful and also has quite wonderful moments. But it is not strong enough to carry the film for more than two hours and to trigger the really big emotions in the viewer. There are always scenes in which the story just ripples along nicely, which in the long run can seem a bit tough or maybe even a bit boring for some viewers. Exit Marrakech is a nice movie. But it didn't become the rousing work that was to be expected after Link's very moving predecessors. But if a nice story and wonderful pictures from Morocco are enough for you, you can definitely recommend Exit Marrakech. Worth seeing