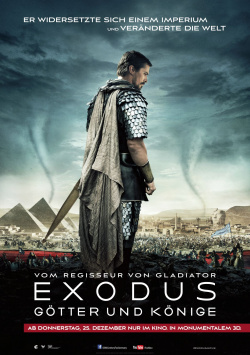 Don't spill it, make it count. That's what director Ridley Scott set out to do in his latest film, which uses cutting-edge 3D technology to retell one of the most epic stories from the Bible. In Exodus - Gods and Kings, Moses (Christian Bale) rises up against Pharaoh Ramses (Joel Edgerton) to free 400,000 Hebrew slaves from Egyptian captivity. Both men once grew up together like brothers. But after a prophecy, Ramses sees Moses as a threat to his future, so he flees into exile. But after being called by God to do so, he returns after many years to lead his people to freedom. Ramses, of course, does not want to let this happen and he uses all means at his disposal to thwart Moses` plan. Even when his country is beset by terrible plagues, the Pharaoh is unwilling to let his former confidant triumph. As Moses leads the seemingly freed slaves through the desert, Ramses and his troops take up pursuit to put a bloody end to the march to Canaan.

Exodus - Gods and Kings has some very good elements and spectacular visuals. Director Ridley Scott once again impressively proves, especially in the second half of the film, that he is a master of his craft and knows how to stage bombastic cinema fodder for the eye. But he lacks here what made his early works like Alien or Blade Runner timeless classics. In those films, Scott did a first-rate job of mixing modern animation with thrilling storytelling. Often, Ridley Scott has shown that he is such a talented storyteller that he can conjure up something extremely involving with a character all his own, even from very conventionally knitted plot devices. When it came to the realization of the story of Moses, therefore, something quite grand could be expected, especially from an accomplished filmmaker like Scott.

However, what viewers are served, especially in the first hour, is an old-fashioned historical ham with an extremely high yawn factor. Sure, effects and set design are top notch. And for long stretches, it even manages to make friends with the cast of Christian Bale as Moses and Joel Edgerton (The Great Gatsby) as Ramses, both of whom take some getting used to. But from the story's inherently stirring dramaturgy, which is hard to resist even if you're not a Bible-believing viewer, the screenplay manages to bring little tension or emotion to the screen. The pathos-soaked dialogue is at times delivered in a shockingly wooden manner, which makes for quite a few very plodding passages, especially in the character-driven scenes.

The decision to have God appear to Moses in the form of a child, who also speaks with a heavily pronounced British accent in the original English, doesn't exactly prove to be the best decision for the film either. On the contrary, at times these scenes, which are supposed to be extremely powerful, almost come across as unintentionally comical. So Exodus - Gods and Kings meanders back and forth between boredom, thickly applied pathos and unintentional comedy for the first 60-80 minutes. Then, when the plagues descend on Egypt, Scott does manage to turn things around. Fascinating imagery and even killer crocodiles really lift the entertainment value of the film and the intensity of the story. From this moment on, the action actually becomes rousing, finally culminating in the moment that probably all viewers wait for in a Moses movie: the parting of the Red Sea.

And here Ridley Scott really deserves a lot of praise. For he defies audience expectations with his very own interpretation of this striking scene, and manages to create something truly surprising and original that will stay with viewers for a long time. At this moment, you're almost willing to forgive the film for many of its previous flaws. However, with the dragged-out finale, Scott recalls all of these, making it clear why his ambitious project must ultimately be considered a failure.

Because spectacular imagery doesn't make a good movie. It doesn't matter if you know the story from the Bible or if you approach this historical epic completely unbiased and it doesn't matter if you believe in God (in whatever form) or not - Exodus - Gods and Kings is in the end nothing more than an imposing shell that lacks the power on the narrative level as well as in terms of the acting performances that this story would have needed. And for that, unfortunately, there is only one: Conditionally worth seeing!