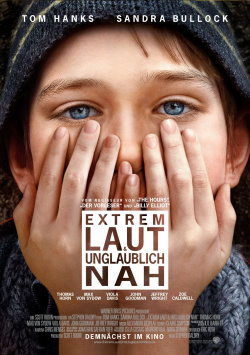 It sounds like the recipe for the perfect movie: Take a renowned filmmaker like multiple Oscar-nominated Stephen Daldry (Billy Elliot, The Reader), add an acclaimed novel by Jonathan Safran Foer (Everything is Illuminated), have it adapted for the screen by an excellent screenwriter like Eric Roth (Forrest Gump) and then spice it up with Oscar winners like Tom Hanks and Sandra Bullock, as well as other first-class actors like Max von Sydow, Viola Davis and John Goodman. The result should be great cinema.

Extremely loud and incredibly close tells the story of eleven-year-old Oskar Schell (great: Thomas Horn), who lost his father (Tom Hanks) in the attacks of September 11, 2001. A year after the worst day, the boy finds a mysterious key in his father's closet. Oskar is firmly convinced that if he could find the matching lock, he would be able to get a message from his father there as well. The only clue is the name Black, written on the envelope where the key was. Now Oskar sets out on a ramble through all five boroughs of New York, seeking out all the people whose last name is Black, in the hope of uncovering the secret of the key. Along the way, he not only meets many unusual people, he must also find ways to overcome his fears in the big, noisy city. But where the journey will lead him in the end, Oskar has no idea.

Jonathan Safran Foer's second novel, published in 2005, was the first literary exploration of the trauma of 9/11. But even though the attacks on the World Trade Center and their aftermath play a very central role for the victims' families, Extremely Loud and Incredibly Close is a much deeper story that also works on a number of levels completely divorced from the events of what Oskar calls only the worst day. On the one hand, it's an almost fairy tale story about an extraordinary boy and his odyssey across New York. It's a tremendously moving family story, with the father-son relationship in particular being quite wonderfully drawn. And finally, it's a very general look at grief recovery. Dealing with the loss of a loved one, be it through death, through divorce, or simply through emotional distancing. All of this is addressed in the film adaptation of the acclaimed novel, with Daldry demonstrating an extremely sensitive hand in his delivery of the story, particularly at the outset.

For example, he largely eschews images of 9/11, only showing one particularly harrowing image in a very blurry fashion, preferring to let his actors' facial expressions do the talking. In doing so, Daldry has taken the bold step of having all the big names he was able to enlist for the film act almost entirely in the background. Tom Hanks, Sandra Bullock, Viola Davis or John Goodman are only small supporting actors, who do their job extremely well, but only play second or even third fiddle. Only Max von Sydow has a somewhat larger role as Oskar's temporary companion on his journey through New York.

But the film is carried almost entirely by Thomas Horn, who makes an impressive feature film debut here. The role of Oskar is a difficult one in that the boy is a somewhat unusual child who comes across as very sensitive, intelligent and mature for his age. To some, Oskar could come across as arguably precocious, which then makes him somewhat unlikable. In this case, of course, the film doesn't work either. But those who see Oskar as a sensitive and just kind of quirky, but lovable boy who tries with all his might to hold on to the memory of his father will certainly be gripped by the emotional impact of the story.

Another major character in the film is New York and its inhabitants, which Daldry has captured in magnificent images. He shows images of the metropolis not usually seen in films, revealing the versatility of the city and the people who live in it. At some point in the second half of the film, however, Daldry goes a bit too far in terms of sentimentality, laying it on a bit thick, especially towards the end. It still works very well, though, and is sure to leave viewers who aren't ashamed of their tears with many a drenched handkerchief. However, the emotions here are created in a less subtle way, as it is still the case at the beginning.

So extremely loud and incredibly close just barely scrapes past the predicate absolutely worth seeing. The fact is that Stephen Daldry has directed quite wonderful emotional cinema, that he has brought an extremely moving story to the screen with great actors and beautiful images. But it's also a fact that the whole thing gets a bit cheesy towards the end and doesn't really do justice to the sensitively told beginning. Nevertheless: a beautiful film and therefore also worth seeing!