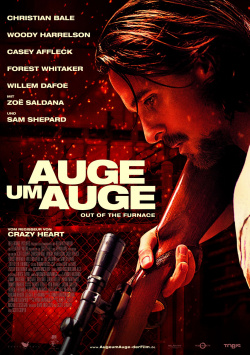 An eye for an eye

Russell Baze (Christian Bale) tries against all odds to live a righteous life in economically struggling Braddock, Pennsylvania. Working at the local steel mill is tough, but brings in the money he needs to care for his ailing father and for his own future with kindergarten teacher Lena (Zo&euml; Saldana). He also has to keep paying off the debt his brother Rodney (Casey Affleck) owes to bookie John Petty (Willem Dafoe). Russell knows his brother needs him because after four tours of duty in Iraq, his brother just can't handle the normal day-to-day life in Braddock. It's not an easy life Russell leads. But still, he's content, especially since Lena keeps bringing him some light into the ever-present gloom. But an unfortunate car accident brings everything crashing down. Russell is sent to prison, abandoned by Lena, and unable to be with his father when he dies. When he's finally released, he quickly tries to get his life back on track. But then Rodney gets involved with the ice-cold Harlan deGroat (Woody Harrelson), setting off events that could end in disaster not only for him, but for his brother as well.

In An Eye for an Eye, screenwriter and filmmaker Scott Cooper delivers the long-awaited follow-up to his multi-award-winning 2009 directorial debut Crazy Heart. Both films have in common a very authentic-looking basic mood and a fallen main character who wants to fight his way back into life. But even though there are some thematic overlaps, the dreary revenge drama goes completely different ways than the intense music film. From the first minute on, there is a depressing shadow over the story of Eye for an Eye. As a viewer, you sense that lack of perspective and poverty reign in Braddock. Despite the very restrained direction, Cooper manages to make clear with just a few very haunting images how hard Russell has to work to find happiness in this world. But even though his father is sick, his brother depressed by the war and his financial situation more than strained, he doesn't let life get him down. He gathers strength for this in the few moments of pure happiness he is allowed to spend with Lena.

Due to the fact that the first act succeeds so well in showing Russell as an upright fighter who manages with his manner to immediately defuse even dicey situations like the first encounter with the brutal hothead Harlan, his deep fall seems all the more tragic. One wishes for Russell that he would manage to climb out of the deep hole he falls into due to an unfortunate moment of carelessness. The fact that this is made impossible through no fault of his own, but by those around him, makes this drama a real tragedy. The more Russell tries to get back up, the deeper he falls. Lena's inability to stand by him during the hard times, Rodney's desire to silence his inner demons through illegal boxing matches, and even the state's prohibition of Russell attending his father's funeral are all elements that prevent him from living a good life even with his upstanding character.

The intense acting of the cast, particularly Christian Bale, Casey Affleck, and an extremely scary Woody Harrelson, underscore the extremely dark and dreary underlying atmosphere of the story. All of this contributes to making Eye for an Eye a very heavy and uncomfortable film. Although dramaturgically there is not necessarily tension in the classic sense, as a viewer you are extremely tense until the very consequential finale. To be able to just let yourself go here and enjoy two hours of pure entertainment cinema is not possible here. An eye for an eye, produced by Leonardo DiCaprio and Ridley Scott, is not a film to switch off, not an entertaining escape from reality, but extremely hard fare that demands a lot from the audience with its very quiet narrative and its overlaying hopelessness. If you're up for it, you'll be rewarded with some very great acting cinema and can certainly appreciate the excellent work of cinematographer Masanobu Takayanagi and the atmospheric soundtrack by Dickon Hinchliffe. In that case, there's also a clear worth seeing. However, if you're looking for a more crowd-pleasing revenge thriller with high entertainment value, you'll definitely be crushed by the heaviness of this one!

Cinema trailer for the movie "An eye for an eye (USA/Großbritannien 2013)"
Loading the player ...