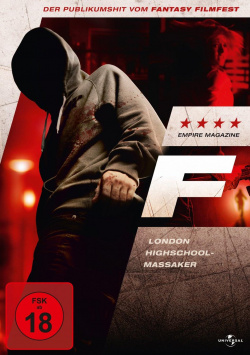 Film: On several occasions film educators had to defend themselves against violent students. Whether in The Class of 1984, The Principal or 187, entries in the class register were always not enough to ensure law and order in the classroom. And also in F - London High School Massacre teacher Robert Anderson (David Schofield) gets to feel the growing readiness to violence of his students on his own body. When he relentlessly confronts a particularly underachieving boy with his performance deficits in front of his classmates, the boy snaps and knocks Robert down. The teacher seems unable to recover from this humiliation. Even after his external injuries are healed, Robert is a broken man, who more and more often reaches for the bottle, who no longer receives any respect from colleagues and students. Dangers lurk everywhere for the teacher and when one evening a milkshake is thrown against a window of the school by unknown persons, he is sure that it is not a prank, but an outright attack. Paranoia? Robert's daughter is convinced. But it soon turns out that the overworked pedagogue was right in his assumption and that soon the blood will flow by the gallon through the corridors.

F - London High School Massacre is a mixture of social drama and tangible slasher, which thanks to a very tight production hardly any lengths and quickly goes over minor weaknesses. The beginning is of enormous intensity and especially in view of the many headlines about violence in schools towards teachers of a frightening reality. On the other hand, the film also shows how the callousness of some teachers can lead to the potential for aggression from frustrated students to explode.

The extent to which teacher Robert suffers from the attack is also well realised. Especially the fact that such incidents are often covered by silence and that the person concerned is left alone with his fears - or even wants to do so out of shame - is portrayed in a comprehensible way. So this aspect of the movie can be called quite successful. Here a very dreary atmosphere is established, which then turns into real siege horror in the tradition of old John Carpenter films like The Assault.

Because when the faceless killer(s) strike, director Johannes Roberts is not exactly squeamish about it and provides slasher fans with some quite effective and bloody moments, which are fortunately also presented completely uncut in the German version - especially at the time truly not a matter of course. The problem of F - London High School Massacre, however, is that the rather short running time, which suits the film quite well, ensures that especially the finale comes across a bit rushed. While the movie takes a lot of time at the beginning to establish its story and the character of Robert, at the end it only focuses on shock moments and a dark atmosphere. But even if F - London High School Massacre gives away its potential at the end, the social drama/slasher mixture offers enough good moments to provide genre fans with entertaining entertainment. Worth Seeing!

Picture + Sound: The quality of picture and sound on this home theater premiere is on a good, but overall rather unspectacular level. Image sharpness and contrast show small weaknesses in the film's many dark moments. Colouring, on the other hand, is consistently well done and captures the atmosphere of the film well. The audio has some atmospheric ambient sounds to offer, which are quite conducive to building tension. Overall, however, the audio remains rather unspectacular and is primarily dominated by the dialogue. Overall, there is for it a: Good!

Extras: Except for the trailer for the film and other program tips from the provider, there is no bonus material on the DVD.

Conclusion: F - London High School Massacre begins as a dreary social drama and then mutates into a bloody slasher in the second half. This mixture does not work in all moments, but the dense staging of Johannes Roberts, the atmospheric location and the sometimes very effective murders provide pleasant tension. Although especially the finale comes across a bit rushed, but overall genre fans can definitely risk a look here - even if the DVD presents itself completely without bonus material