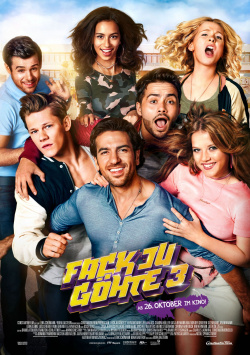 Ex-con Zeki Müller (Elyas M`Barek) has made it: the Abi for his problem students is within reach. But when Chantal (Jella Haase), Zeynep (Gizem Emre), Danger (Max von der Groeben) and Burak (Aram Arami) are frustrated by their predicted future prospects after a visit to the BiZ and take their frustration out on the school just as the school inspector is making his rounds there, the dream of the Abitur seems to be shattered. For not only is the school threatened with closure if not enough new pupils enrol. Zeki's class also has to pass a test, which is essential for admission to the Abi. Now Zeki has to try in his usual non-conformist way to motivate the disillusioned students again and to show them that they have their future in their own hands. But this turns out to be more difficult than expected - especially since Zeki himself has to ask himself what the future holds for him professionally when his protégés leave school.

With Fack Ju Göhte, after Turkish for Beginners, Bora Dagtekin once again proved his flair for accurate wordplay and unrestrained slapstick. It is therefore no wonder that the film was THE box office hit of 2013 and, with over 7.3 million viewers, is one of the most successful German cinema comedies of recent years. In the USA, even the Mexican remake made it into the cinema charts in 2016. The recipe for success was then of course soon continued with a second part, which could not hold a candle to the original in any way. The fans didn't care, which is why over 7 million viewers stormed into the cinemas again. And so now a (supposedly) concluding third part may come into our cinemas.

In view of the enormous success, which is to be expected here again, it is admittedly vain labor of love to say anything negative about the film. I still have to do it, though. It's not because - even though Part 3 takes another step in the right direction - this trilogy finale is far from the originality, wit and charm of the first film. It's also not because the humour too often drifts into arguably strained claptrap and completely lacks the subversive level that was still evident in places in the first film. No, it's rather because of the way the film deals with very important topics like bullying, suicide among teenagers or violence in the family. All of these topics are addressed, which in itself is very commendable. However, Dagtekin takes such a sledgehammer approach here that it trivializes any bona fide intent.

Example, anyone? A boy is bullied to such an extent that he jumps off the school roof. The kids who made him do it don't care, they even film it. But then Zeki makes a big speech and suddenly bullies and bullied are best buddies. And then there's Chantal, whose mother takes crack and then also gets violent sometimes and wants to take her mother out of school. Of course, in such a case, it's enough to go by the crack mom's house, give her a little twist on the arm, and the family's blessing is set straight. What about the girls who arrange to commit suicide together? Yes, with one of them a love letter is enough for new courage to face life, what about the other girl doesn't matter at all.

May be that this handling of relevant topics doesn't go down negatively with the target audience. But especially when you notice how the film is celebrated by a major German daily newspaper for dealing with taboo subjects, you could really throw up. To suggest to children and teenagers that bullying or suicide attempts aren't sooooo big problems after all, because they are so easy to get rid of, is just annoying.

Neither do the politically incorrect jokes and the various slapstick interludes succeed in making up for this. They simply lack the refreshing levity of the original. Dagtekin and his team were too concerned with giving the audience what they wanted to see. And unfortunately, that didn't do the overall result any good. As I said, fans will care plenty. They're going to make Fack Ju Göhte 3 a huge box office success once again. And for all fans who could even laugh at the really not good second part, then again: worth seeing - even if a good movie really looks different.