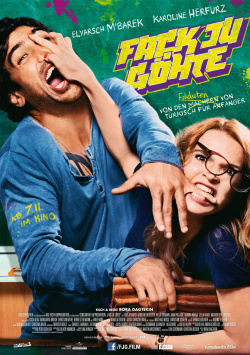 The education crisis in Germany is getting worse and worse. For students and many teachers, it's a disaster. For ex-con Zeki Müller (Elyas M`Barek), on the other hand, it is a blessing. When he finds out, fresh out of prison, that a gym has been built on the spot where his girlfriend, stripper Charlie (Jana Pallaske), buried the loot from his last heist, he has only one choice: he has to start working as a substitute teacher at the school that belongs to it in order to gain access to the basement. Only from there can he dig his way to his money. Luckily for him, a desperate teacher (Uschi Glas) has just thrown herself out of the window into the rehab and Principal Gerster (Katja Riemann) is desperately looking for a replacement. The fact that he has secretly copied the report cards of the over-correct trainee teacher Lisi (Karoline Herfurth) is not noticed by the stressed headmistress. And so nothing stands in the way of Zeki's plan. It's just too bad that he's assigned to 10b, of all classes, the worst chaos class of all, and the kids get on his nerves. And then there are those disturbing feelings he seems to develop for wallflower Lisi. But Zeki has always known it: school is just stupid.

With Fack Ju Göhte, after Turkish for Beginners, Bora Dagtekin once again proves his flair for spot-on wordplay and no-holds-barred slapstick, spiced with a dash of subversive humor. While there are some scenes that just seem silly (while still being kind of fun), Dagtekin hits the nerve perfectly in other scenes to the point of almost being painful. The best example of this is the window fall of Mrs. Leimbach-Knorr, played by a truly hilarious Uschi Glas, which the students comment on by all pulling out their cell phones to film the woman lying on the ground. Dagtekin manages to stage this inherently rather unflattering scene with very biting, almost satirical wit, which is important in that this is probably one of the least unfortunately over-the-top moments of the film - and that in itself would be more of a reason to cry than laugh.

But this is where Fack Ju Göhte's real strength lies. As silly and over-the-top as the comedy presents itself, Bora Dagtekin always manages to change the tone when the story demands it. Things can get a little more emotional or a little more biting and profound. Sure, there are still quite a few gags that don't hit the mark and some small plot elements that don't quite want to work. But overall, Dagtekin has created a comedy whose fun factor can clearly dominate over the minor weaknesses.

This is, however, also due to the visibly good-humored cast, led by a wonderfully brawny Elyas M`Barek and an enchanting Karoline Herfurth, who may finally once again play out their comedic potential with a lot of courage to slapstick. But also supporting actors like Jana Pallaske as a stripper with a big heart of silicone, Max von der Groeben as a wannabe checker or Jella Haase as a chav Chantal with unimagined intelligence potential make sure that this bum comedy is a lot of fun.

Gerade Chantal perfectly symbolizes what Fack Ju Göhte actually is. Because even if the film seems to be a bit deep on the surface at times and can't refrain from many an unnecessary quip, on closer inspection the comedy is much more clever and profound than one might initially believe. But regardless of whether it's a flat gag or a profound joke, Fack Ju Göhte is one thing in particular: great cinema fun for everyone who already liked the Türkisch für Anfänger film. For this there is a praise in the class book with the note "worth seeing!