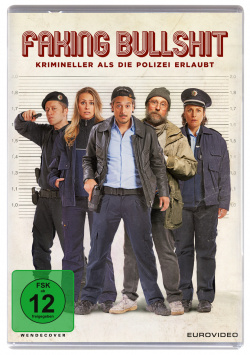 Film: The police in a small town in North Rhine-Westphalia has a big problem: There is simply too little crime here. What has so far been an extremely relaxed state of affairs for the police officers Deniz (Erkan Acar), Rocky (Adrian Topol), Netti (Sanne Schnapp) and Hagen (Alexander Hörbe), now becomes a real threat. Because their colleague Tina (Sina Tkotsch) is sent to them to investigate whether the station 23 should not be better closed. Of course, the cops don't want to let that happen. With the help of the homeless Klaus (Bjarne Mädel) they fake a crime - but that's just the beginning. Suddenly, more and more crimes are taking place in the tranquil little town - but will Tina really fall for it?

"Faking Bullshit - Criminal Than the Police Allowed!" is a remake of the 2003 Swedish box office hit "Kops". Alexander Schubert, ensemble member of "heute-Show" has convincingly transferred the concept to Germany in the year 2020 (before Corona, of course) and has also incorporated his very own ideas. As a result, his comedy is not a flat remake, but a pleasantly independent work that you can have great fun with even if you are well acquainted with the original. This is partly due to Schubert's amusing script, but also to the good-humoured ensemble he has assembled in front of the camera.

Especially Erkan Acar, Alexander Hörbe and Sanne Schnapp play so sympathetically that one can only wish the troupe that their office will not be closed. And Bjarne Mädel is just great as a petty criminal hired by the police. The scene surrounding his first "robbery" is wonderfully funny and is a good example of the film's delightfully quirky humor. Sure, not every gag is spot on and especially towards the end the whole thing runs out of steam a bit. But on balance, the film easily makes up for its shortcomings with plenty of wit and charm.

"Faking Bullshit - Criminal than the Police Allowed!" is light entertainment that never seems too contrived or silly, but can simply convince with likeable characters, a wonderfully quirky story (even if this is borrowed from another film) and lots of funny dialogue. If you want to switch off and laugh heartily, this is the right movie for you. For this there is clearly - no fake - a deserved: absolutely worth seeing!

Picture + Sound: The image of the DVD convinces especially by the powerful, warm coloring. The sharpness of the picture is on a good level, real blurring or dirt are not to be made out. The sound is present in a decent Dolby Digital 5.1 mix, which transports the dialogue well understandable, but also repeatedly brings the surround channels to bear on the ambient sounds and smaller sound effects. Good!

Extras: Except for the trailer, there are unfortunately no extras. Too bad!

Conclusion: "Faking Bullshit - Criminal than the police allow!"is an amusing comedy that doesn't quite match its Swedish original "Kops"but still offers very entertaining entertainment with charming characters and witty ideas. The DVD presents the film in appealing picture and sound quality. Only bonus material is in vain. Nevertheless: Who likes German comedies of the somewhat weirder kind, which can access here confidently. Recommendable!