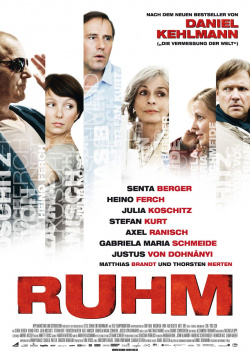 With her new film Fame, filmmaker Isabel Kleefeld ventures into a particularly ambitious undertaking. She tries to bring the very complex novel by Daniel Kehlmann to the screen and to combine the individual episodes of the original into a coherent and entertaining whole. However, she has only succeeded to a very limited extent.

The individual, loosely connected stories lie somewhere between comedy and drama, interspersed with elements of mystery and satire: There is, for example, the electronics engineer Joachim (Justus von Dohnányi), who immediately after buying his first mobile phone receives strange phone calls that allow him to listen into a completely different life for once. Film star Ralf Tanner (Heino Ferch) also wants to lead a different life when he gets a glimpse of what it's like to be mistaken not for a big star, but just for a double. The terminally ill Rosalie (Senta Berger), on the other hand, no longer has such a choice. She has reached the end of her life and now only wishes to die with dignity.

At the same time, writer Leo Richter (Stefan Kurt) is on a reading tour in South America with his girlfriend Elisabeth (Julia Koschitz). As much as Leo tries to respect Elisabeth's desire to never be a part of one of his stories, reality keeps creeping into his work. And that could spell doom for their relationship. The passionate internet blogger Mollwitt (Axel Ranisch) can't imagine anything better than being part of Leo's work, as he is a great admirer of the writer. And crime writer Maria Rubinstein's (Gabriela Maria Schmeide) life is also greatly affected by Leo Richter's success when she has to stand in for him on a writer's tour of the former Eastern Bloc...

Fame has some quite wonderful moments. The beginning of Maria's reading tour in particular is an excellently observed piece of satire, and even the first few minutes, in which a Joachim, completely overwhelmed with his new mobile phone, sheerly despairs at the constant calls that are definitely not addressed to him, reveal a certain potential. Heino Ferch is also convincing in his dual role as a self-absorbed actor and his even more self-absorbed doppelganger. All this combined with good camerawork and intrinsically very interesting stories should actually be a great film.

Should be - but it's not! Because apart from the fact that, which is not uncommon in an episodic film, not all stories work equally well, it is especially the linking of the individual parts and their mostly non-existent resolution that ultimately make the film fail. This is because the viewer, who is willing to invest time, money and attention into the stories of fame, ends up almost completely left hanging in the air. Sure, it's fun sometimes when you're not handed everything on a platter and allowed to ponder meaning and resolution on your own. And there doesn't always have to be a clear finale either, open endings do have their appeal - as long as they fit the story. But to simply abandon characters you've followed throughout the film, to not give them a fitting conclusion and to end their stories more or less unfinished is just annoying.

Ruhm has great actors, a successful book template, and lots of good ideas. But the overall picture and especially the resolution of some of the six stories just don't work and are just annoying given the clear potential that exists. Therefore, if you just want to see some good acting cinema, you can risk a look. But those hoping to get more than just a few good scenes and interesting approaches are more likely to leave the cinema disappointed

Cinema trailer for the movie "Fame (Deutschland/Österreich/Schweiz 2011)"
Loading the player ...