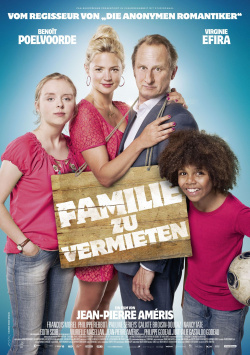 Paul-Andr&eacute; (Jean-Pierre Am&eacute;ris) has a wonderful house and lots of money. He hasn't had to work in a long time. But what so many people dream of does not really make him happy. Because instead of many friends, Paul-Andr&eacute; merely has many fears and quirks, which he tries to tame with classical music and masses of pills. But there is only one thing that could really help him: a loving family. But money can't buy that. Or can it? When the shy single sees a report on TV about the desperate single mother Violette (Virginie Efira), who has become a shoplifter for her two children, Paul-Andr&eacute; decides to make her an immoral offer: He wants to rent her little family for a few months to see if normal family life is actually what might fill the void in his life. But he has no idea what he's getting himself into.

With Family to Rent, director Jan-Pierre Ameris delivers another romantic comedy of the somewhat unusual kind, following The Anonymous Romantics. Again, the characters are not exactly predestined to find each other and have anything like a normal relationship. And again it's Benoit Poelvoorde who gets in the way of himself and his happiness in a particularly amusing way. With Virginie Efira, who just thrilled German cinema audiences in the wonderful comedy Pear Pie with Lavender, he has been given a charming partner who, as a tough and somewhat loopy single mother, is the perfect counterpart to the fussy oddball.

So the ingredients for this somewhat different family comedy are almost perfect. But the execution, unfortunately, is not quite as successful as it first appears. After a really funny and fast-paced beginning, the film gets increasingly lost in lukewarm clichés, illogical plot twists and long-winded irrelevance. The comedy never really gets bad. Many scenes are still very nice and quite amusing even in the weaker second half. But the story just doesn't really want to ignite anymore. The endearingly quirky originality that distinguished The Anonymous Romantics is almost completely missing here after the first twenty minutes.

A few nice gags and quite charmingly drawn characters are unfortunately not enough to save this comedy from mediocrity. But at least the initial idea of the story and the two main actors are good enough to make Family for Hire just worth watching in the end, despite all its weaknesses. But if you were hoping for an original charm offensive from France, you will surely leave the cinema disappointed!

Cinema trailer for the movie "Family for Rent (Frankreich/Belgien 2015)"
Loading the player ...