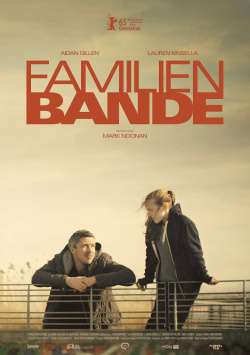 After the death of his sister, incarcerated Will (Aiden Gillen) is released from prison early to care for his eleven-year-old niece Stacey (Lauren Kinsella). Should he prove to be a suitable guardian, the rest of his prison sentence will be waived. For Will, it's the perfect opportunity to put his dark past behind him. But unfortunately, Stacey isn't at all pleased about living with her uncle - and in a trailer park at that. When it turns out that the girl suffers from narcolepsy and is therefore not accepted at school, the tension between the two increases. Only slowly does Will manage to get closer to his niece. But it is clear that they can only become a family if they both face up to their past.

With his directorial debut Family Ties, filmmaker Mark Noonan achieves the small feat of immersing an inherently conventional story in a very special atmosphere, wrapping up the not-so-happy subject lightly and filled with subtle humour. Shot in the Irish Midlands, the film is given a raw but at the same time extremely engaging charm by the landscape there. Although the trailer park in particular doesn't exactly make you want to live or vacation there, the images never seem dreary or depressing. Rather, they exude an unadulterated beauty in which the hopeful undertone of the story can unfold very nicely.

The film is undoubtedly carried by its two lead actors. Aiden Gillen, known to an audience of millions as Petyr Baelish aka Littlefinger, shows a very different side of his acting skills here. He embodies Will as a withdrawn man driven by the hope of ridding himself of a heavy burden from his past by being a good surrogate father to his niece - a task that ends up overwhelming him. For as much as he wants a fresh start, he doesn't want to confront himself or Stacey with the guilt he has brought upon himself. This creates a very nuanced character that Gillen brings to life believably and sympathetically.

At his side, thirteen-year-old Lauren Kinsella acts with astonishing aplomb. It's a minor miracle that she manages not to make Stacey seem precocious or overly sassy. Instead, she comes across as a quick-witted but also very insecure, sad girl who really just longs for a happy family. The way she slowly opens up to her uncle and sets events in motion to bring him and her trailer neighbor Emilie (Erika Sainte) together really plays the little girl big.

Family Ties is a small film that isn't cramped for big emotions or loud laughs and isn't too doggedly headed for a happy ending. Precisely because of this, it is a very charming piece of work that feels authentic and makes you happy despite a certain sadness. A very beautiful film that not only arthouse lovers should not miss. Worth seeing