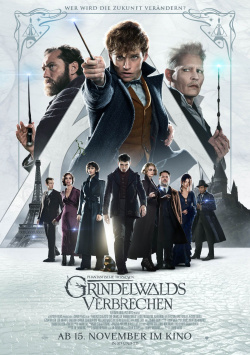 While MACUSA, the Magical Congress of the United States of America, with the help of Newt Scamander (Eddie Redmayne), has succeeded in arresting the Dark Wizard Gellert Grindelwald (Johnny Depp). However, he cannot be kept under lock and key for long. He manages to escape and in Europe, he sets about gathering a Powerful Entourage around him to put his true plans into action: Domination of all non-magical beings. Only Albus Dumbledore (Jude Law) would be powerful enough to put a stop to him. But there is a secret that keeps Dumbledore from facing his former companion. And so it is to be his former pupil Newt who is to foil Grindelwald's plans.

Two years after the first instalment of the Harry Potter prequel, with which J.K. Rowling set out to delve much deeper into the magical world, Newt Scamander and his friends return to the big screen in Fantastic Beasts - Grindelwald's Crime. Even more so than the first film, the connection to the Potter books and films is made. Fans will encounter many other names and characters besides Albus Dumbledore that they already know, or who have kinship ties to characters who will be associated with the young wizarding student many years later.

At the same time, however, the new aspects established in the first film are expanded upon. The whole thing gets bigger, more complex. and more confusing. That's the only real problem with this film. It just wants to tell too much and as a result fails to really focus on any one aspect of the story. Sure, it's fun as a fan to delve deeper and deeper into the magical world, to see familiar things again - a certain magic school, for instance - and discover lots of new things. The richness of detail, which is again offered in some scenes, is simply wonderful. But where there is (almost too) much magic on offer visually, it is more and more lost in the story itself.

Individual aspects work very well. For instance, Grindelwald's connection to Dumbledore or the love triangle between Newt, Leta Lestrange (Zoe Kravitz) and Newt's brother Theseus (Callum Turner) have as much potential as Credence's (Ezra Miller) search for his true origins. But since all of these are just a few of numerous plot threads, none are really fleshed out. The result is an overly cluttered adventure that ends up trying too hard to tie up the individual ends.

Yes, the very big magic may be missing from Fantastic Beasts - Grindelwald's Crime. However, the film still offers enough magical fire to fans of this world in particular to keep interest in further sequels blazing. The cliffhanger with which this part ends seems a bit contrived, but still works very well. One can only hope that J.K. Rowling will cut back dramaturgically for the next film, so that this very special magic can blossom again, which has made Harry Potter a worldwide phenomenon to this day. And driven by this hope, despite some weaknesses, there is clearly still one for this film: Absolutely worth seeing!