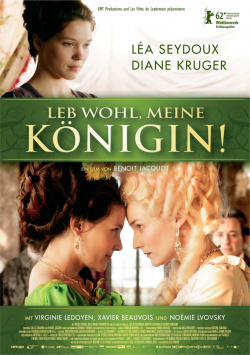 Versailles in July 1789: although popular unrest is growing in Paris, King Louis XVI and his entourage are not letting themselves be deprived of the comforts of life. But more and more rumours are spreading that the enraged citizens are preparing to storm the Bastille. Sidonie Laborde (Léa Seydoux), Marie Antoinette's (Diane Kruger) reader loyal to her queen, refuses to believe that an escape by the queen is imminent. She goes about her duties with unwavering zeal, while chaos and fear spread around her more and more. But there comes a point when even Sidonie can no longer deny the danger, unaware that she is yet to play an important but also dangerous role...

Farewell, My Queen premiered as the opening film at this year's Berlinale. Reactions to the costume drama, however, were rather muted. This could be due to the fact that there are quite a few moments in the film that, at first glance, could be described as trivial and boring. This criticism is also justified to a certain extent, because it is sometimes made very difficult for the audience to get involved in the action. However, those who are willing to engage with the sometimes unwieldy nature of the production may then realize that director Benoît Jacquot has created a very special look at the events of 1789 here, one that is quite different from what other filmmakers have had to say about Marie Antoinette and her final days.

Because the whole thing is told from the perspective of a common servant, the viewer here gets to enjoy a look at what is left out of films such as Sofia Coppola's Marie Antoinette: life at Versailles beyond luxury and pomp. Although there are also some scenes between Marie Antoinette, played by Diane Kruger in part a bit too put-upon, and a wonderfully snooty Gabrielle de Polignac portrayed by Virginie Ledoyen, the camera primarily follows Sidonie as she goes about her work, walking through corridors that the wealthy part of the court would never enter, talking to other servants, where it becomes clear that even here there was a clear hierarchy that had to be adhered to at all times. During very long tracking shots, the detailed set comes into its own, making the film a real visual treat.

While Diane Kruger, as mentioned above, is only partially convincing as Marie Antoinette, Léa Seydoux delivers a great performance as the devoted reader. Seydoux, who was last seen as an ice-cold killer in Mission: Impossible - Phantom Protocol, gives a very powerful performance as a maid filled with her feelings for the queen, her unwavering loyalty, and her fear of impending events, and also a thoroughly multi-faceted performance despite her facial expressions barely changing, which carries this film through the moments that could have otherwise just been described as inconsequential.

Farewell, my queen is opulent cinema and dramaturgically dense arthouse fare in one. Emotions are not played out here in a big way, but rather hide beneath the surface. But it's worth it to get involved and to fathom them. Because then this film proves to be a powerful cinema, despite its sometimes a bit brittle and worn nature, which can show off with great pictures and an excellent leading actress. Worth seeing

Cinema trailer for the movie "Farewell, my Queen (Frankreich/Spanien 2012)"
Loading the player ...