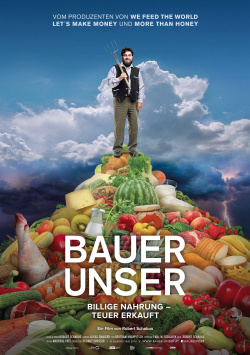 Life on the farm! Especially for people from the city, this has long been an idyllic notion. But the reality has little in common with the romanticized notion. Many farms are struggling to survive or have had to give up out of necessity. Because the mantra of industry - faster, cheaper, more - is driving them to ruin. Either it is not possible to keep up with the big competition or the yields are not sufficient to cover the running costs - even if the business seems to be going well at first sight. As varied as farming may be, everyone agrees: it can't go on like this.

In his new documentary Bauer unser, Robert Schabus, who himself grew up on a farm in Upper Carinthia, takes an unvarnished, highly interesting look at the current state of agriculture. Farmers have their say as well as EU politicians. The film presents different forms of modern agriculture - from organic farmers to small dairy farmers to large farms such as an egg farmer with 65,000 laying hens. The viewer is given a glimpse into everyday working life, with the protagonists telling very honestly what they see as the biggest problems and how they try to counteract them. This can work, both on a very modest scale and on a large scale. But it is not uncommon for farmers to pay even more to be able to manage their farms - and this is not only discouraging for them, but absolutely existence-threatening.

With detached objectivity, which comes from the fact that Schabus completely restrains himself and only lets the protagonists from agriculture and politics have their say, the film exposes the problems, but at the same time also shows that there are definitely possible solutions. It is frustrating that it would actually be relatively easy to ensure a system here from which everyone - agriculture and consumers alike - could benefit in the long run. But it would mean higher prices for the consumer and less profit for the industry. And unfortunately, we live in a world where few are willing to pay that price.

From that perspective, Bauer ours is absolutely frustrating. But seeing that there are ways out, and that there are people fighting for justice, does resonate with some hope in the end. The bottom line is that this is an absolutely important documentary, because the issue affects us all and because even a slight change in one's own buying behavior can help change things for the better. Because as long as consumers are not willing to pay enough for milk and butter so that the people who produce it for us can live on it, nothing will change. And that would be really fatal in the long run! Therefore: Absolutely worth seeing!!

Cinema trailer for the movie "Farmer our (Österreich 2016)"
Loading the player ...