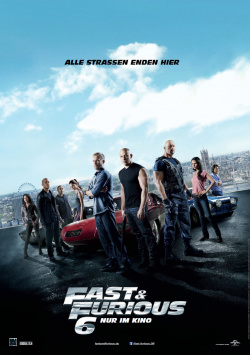 Buckle up, because it's getting fast and furious again! For the sixth time, the engines of the Fast & Furious series are roaring in theaters. And the concept of muscles, chicks and engines still works really well in the sixth attempt. The story follows directly on from its predecessor, the franchise's most successful installment to date with a worldwide box office take of over $625 million. After their latest coup in Rio, new millionaires Dom (Vin Diesel) and Brian (Paul Walker) are having a good time with their wives far away from the US. And the rest of their team is also scattered around the globe indulging in their new wealth. But they don't feel free, as they are still being hunted by FBI Agent Hobbs (Dwayne Johnson). But when he shows up at Dom's house one day, he's not out to put the gangster behind bars. Rather, Dom and his team are to help Hobbs put a stop to the genius criminal Owen Shaw (Luke Evans) and his gang of ruthless elite drivers. Should they succeed, all their criminal records would be expunged. But there's a much more crucial reason for Dom to help Hobbs: his ex Letty (Michelle Rodriguez), who was presumed dead, works for Shaw, of all people. Since Dom desperately needs to know if it is indeed Letty, he agrees to the offer. In London, he and the other lead feet take up the fight against Shaw. But he seems completely superior to them, and not just in technical terms.

Logic and deep dialogue have never been the hallmark of the Fast & Furious films. But while the first three films focused primarily on underground street racing, by Part 4 the series had become increasingly fast-paced action thrillers, like the Oceans films with a hefty load of testosterone and horsepower. This change in approach paid off as the franchise, which was already thought dead with the very weak third installment, has become more successful with each film since the fourth sequel. Justin Lin, who has been on board as director since part 3, knows that he has to step it up a notch each time to get the fans excited again, so that they will continue to demand new Fast & Furious movies in the future.

After part 5 seemed to be hard to top in terms of action, Lin now lets it rip in London and Spain. And even if fast cars play again one of the main roles, the action often takes place here also in the direct duel. There is then just not with horsepower, but with the bare fist against each other fought. Since the newcomer is mixed martial arts fighter Gina Carano, who already cut a damn fine figure in Steven Soderbergh's Haywire, especially the fight scenes in which she is involved have an extremely high show value. But also the car chases through London and on a highway in Spain should make fans ecstatic.

The mixture of humor, coolness and action, which was especially well worked out in the last part, works very well here again, whereby you can always tell that the film does not take itself too seriously. And that's something you should try to avoid as a viewer. Because that's the only way to endure some of the overblown sayings and completely unrealistic action interludes. If Vin Diesel suddenly seems to have learned to fly and can thus save his Letty, then this scene in itself would only seem embarrassing and completely absurd. In the Fast & Furious universe, however, such scenes work, which is, however, also due to Vin Diesel, who masters even completely exaggerated scenes with a stoic coolness that is truly unique.

A very special highlight is then offered to the fans in the end credits. Not only is it finally made clear here that Part 3 takes place chronologically after the events of Part 6. It also introduces the big antagonist for the seventh film. And that's one to really look forward to. This Mr. X fighting Vin Diesel and Dwayne Johnson - more testosterone really does not go.

Fast & Furious 6 is neither particularly clever head cinema, nor are the audience particularly high-quality dialogue or great acting offered. Instead, however, there is pure fun. Justin Lin and his team really let it rip from the very first second, weaving elements from parts 3, 4 and 5 into the story so that it actually feels like a cohesive story that actually works really well as a whole. Logical it isn't, but that's not really the claim being made here. The fans are just supposed to be given something for the eye and for the lowered entertainment center. And Lin has mastered this mission again splendidly. Therefore, if you liked part 5 and can overlook the slightly too extended and tiring final fight, you will also be absolutely thrilled by Fast & Furious 6. Brain off, gear in and off to the cinema!