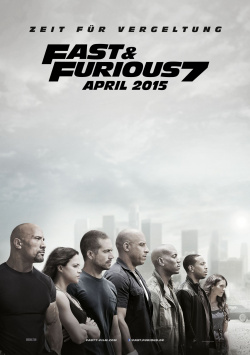 A year has passed since the dramatic events that brought Dom (Vin Diesel), Brian (Paul Walker) and their crew their long-awaited freedom from punishment. Now they're all trying to live something resembling a normal life. Dom tries to get closer to his estranged Letty (Michelle Rodriguez), while Brian does his best to provide a quiet family life for Mia (Jordana Brewster) and their shared son. Tej (Chris Ludacris Bridges) and Roman (Tyrese Gibson), on the other hand, enjoy their freedom in a very different way. It almost seems like the wild times are finally over for the crew. But then their past catches up with them. Because the cold-blooded Deckard Shaw (Jason Statham) goes literally over dead bodies to avenge themselves on those who have sent his brother Owen (Luke Evans) into a coma. Agent Hobbs (Dwayne Johnson) is at the top of that list. But Dom and his friends aren't safe from Shaw's vendetta either. In order to track down the killer before he finds them, the crew must reunite to grab the prototype of a new kind of surveillance program for the government. Should they succeed, they will be allowed to use that very program to find Shaw. And so it's back behind the wheel for Dom, Brian, Tej, Roman and the others, and around the world with all the horsepower at their disposal - all for the safety of their extended family...

The unexpected death of lead actor Paul Walker, who was killed in a car accident while filming was still in full swing, naturally hangs over Fast & Furious 7 like a heavy cloud of gloom. There probably won't be a fan of the series who feels queasy about some of the scenes in the new film in the hugely successful series. It was a difficult task for the makers to bring the film to a close after Walker's death in a way that honoured his memory, but still offered fans light-hearted entertainment with the usual amount of action and spectacular stunts. And quite incidentally, the last film, the franchise's most successful installment to date, should then be topped in every way.

Under this pressure, there were really only two options left: either Fast & Furious 7 becomes a completely overstuffed, unbalanced mess that wants too much and, precisely for that reason, doesn't really achieve any of it. Or, true to the motto, Now More Than Ever, director James Wan manages to deliver the best installment in the series to date. While that may not be entirely successful dramaturgically, the bottom line is that the film is closer to the second option than the first. In doing so, it clearly benefits from the makers' wise decision not to take things down a notch in terms of action and fun factor after Walker's death out of a misplaced sense of respect. Rather, the actor is given a more than dignified send-off by offering his fans exactly what made him so popular with this series. The fact that he was replaced by his brother and computer tricks in the scenes that were shot after his death, you notice only if you look very closely. So James Wan and his team have succeeded very well in giving Paul Walker the send-off he and also his film character Brian deserved.

But Fast & Furious 7 is really only a big Paul Walker farewell show at the end, when tributes are paid to him with clips from the earlier films and a moving voice-over commentary by Dom aka Vin Diesel. But until then, the film is one thing above all else: a real action grenade. Of course, logic and the laws of gravity take their leave after only a few moments. When Brian has to free himself from a bus that threatens to plunge into a deep abyss or when he and Dom crash through three skyscraper towers in Dubai in an extremely rare car, it's so unrestrainedly overdrawn that there's probably no one who really takes it seriously. And that's just as well. Because the Fast & Furious movies have never been about depth, realism or pretension, just action, fun and lots of horsepower. And in that regard, Part 7 actually managed to kick it up a notch.

This is due in part to the decision to bring in Jason Statham as the villain. The Transporter star is just great as a merciless killer and provides some real wow moments, especially in the fight scenes. But Kurt The Rattlesnake Russell also gets to give it another go at 64. And also Tony Jaa (Ong-bak) and the professional wrestler Ronda Rousey enrich the series with their fighting skills immensely. And as befits a true Fast & Furious movie, there's plenty of fodder for the eye besides the action: tuned cars, flashing chrome, plump backsides of attractive ladies and naked torsos of muscle-bound gents. Who needs deep dialogues.

Although some action sequences are cut a bit too hectic and especially in the first third the whole family-is-the-most-important-message is served a bit too much with penetrating pathos, Fast & Furious 7 is still a great action flick with suspense, humor and mighty loud noise. The film gives fans exactly what they want to see. And who does not expect more than a material battle spiced with a little self-mockery, which comes to a cinema visit simply not past. Absolutely worth seeing!