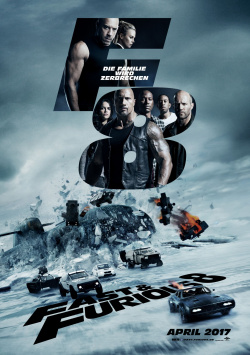 Dom (Vin Diesel) and Letty (Michelle Rodriguez) have married and are living happily in Cuba. Brian and Mia have completely retired. And the rest of the team has been cleared of all criminal charges and accusations as well. The perfect happy ending actually. Until one day, for some unknown reason, Dom joins a dangerous cyber-terrorist (delightfully evil: Charlize Theron) and turns on his family. He manages to get his new partner a dangerous weapon that could seriously threaten world peace. Now Mr. Nobody (Kurt Russell) recruits Hobbs (Dwayne Johnson), Letty (Michelle Rodriguez), Roman (Tyrese Gibson), Tej (Chris Ludacris Bridges) and Ramsey (Nathalie Emmanuel) to stop Dom. And as if that task wasn't hard enough, they're tasked with working with Deckard Shaw (Jason Statham), of all people, who they just put behind bars. A merciless chase around the globe begins, centering on why Dom seems to suddenly be fighting everything he's put his heart and soul into over the years....

The Fast & Furious franchise is truly a rarity. Rarely does such a long-running series manage to increase its success with each installment. But the action series was fortunate that after a weak second installment and a really bad third installment, director Justin Lin's team opted for a complete reboot with the original cast from Part 1 - true to the motto: new model - original parts. The films became more and more gloriously over-the-top action thrillers with elements of classic heist movies and agent thrillers. Part 7 brought a break in more ways than one. For the first time since the third film, James Wan, not Lin, directed the film. In addition, the film marked the last appearance of the much too early deceased Paul Walker. With over 1 billion dollars in the worldwide box office, the seventh film was then also by far the most successful of the series.

Although the finale of the seventh part was not only by the farewell of Walker's character Brian, who is to be granted a happy future with his wife, actually a good conclusion to the franchise, it was of course clear after the incredible success that it had to go further. And so now Fast & Furious 8 is jetting through our cinemas, this time directed by F. Gary Gray (Straight Outta Compton, The Italian Job). The film is said to be the starting gun for a new (and final) trilogy in which the cards will be reshuffled once again. The ingredients, of course, remain the same: There are fast cars (even ones you might not believe at first), fast-paced action, beautiful bodies and pithy sayings.

Part 8 also plays to the strengths of this franchise well. The makers know that they are not offering realistic, sophisticated cinema for the feuilleton, but adrenaline-filled fun cinema. And logic or the laws of physics are allowed to say goodbye. With a self-deprecating wink, it is made clear that the audience should not take the whole thing too seriously. Just switch off your brain and have fun. And on this level the new movie works very well again. However, also with two limiting but.

The first relates to the more dramatic moments of the story. Is just with the action and the cool sayings clear that here everything is deliberately overdone staged, the whole All for the Family mantra seems to be quite serious. And that doesn't really fit, even seems unintentionally funny in the long run. There's just way too much overdone here, which could also use a little lightening up. The second but refers to the action. No question, it's great again and wonderfully over the top. But especially with the New York sequence you get the feeling that the point has been reached where more doesn't necessarily mean better. There are some quite great moments here, but somehow it's then almost too much of a good thing.

There would be one more criticism, but that would give away too much about a particular twist. But despite all the valid criticisms, Fast & Furious 8 is, like its predecessors, popcorn cinema of a particularly entertaining kind. Who could do little with the series so far, will certainly not become a fan now. But if you like the direction that these movies have taken since part 4 and if you have a soft spot for explosive action of the particularly inventive kind, you will have a great time at the cinema. Absolutely worth seeing