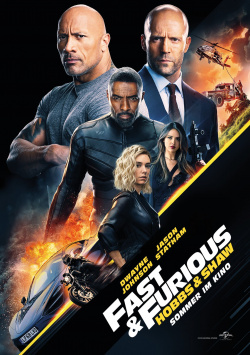 Oh no: When a virus is stolen that threatens the entire world, Secret Service agent Luke Hobbs (Dwayne Johnson) is tasked with working with, of all people, ex-elite soldier Deckard Shaw (Jason Statham). The two have proven in the past that when they clash, things usually come crashing down hard. But there's no time for their rivalries, because a dangerous terrorist organization is after the virus that Deckard's sister Hattie (Vanessa Kirby), of all people, injected herself with. Now she's being hunted by intelligence agencies as well as cybernetically enhanced terrorist Brixton (Idris Elba). If they're going to save Hattie and keep the virus safe, Hobbs and Shaw will have to pull themselves together - because that's the only way they stand a snowball's chance against the seemingly invincible Brixton.

Fast & Furious: Hobbs & Shaw is the first spin-off of the wildly successful action franchise. Director and stunt specialist David Leitch (John Wick, Deadpool 2) has extracted the two crowd-pleasers, who provided some of the best scenes in the last instalment, from the storyline spanning the previous instalments and thrust them into a story all of their own, where they get to provide some mighty good fun without a lot of horsepower and tuned-up sleds. Don't worry: there's still plenty of fast-paced chase scenes here, of course (though the secret hero here is likely to be a motorcycle). And some typical Fast & Furious motifs, such as the theme of family, are also picked up here. But all in all, Hobbs's solo & Shaw is a pleasantly self-contained work that scores with great action and delightful humor.

The quips Hobbs and Shaw throw at each other are amusing, as are two rather unexpected guest appearances. One in particular even makes for one of the best running gags of the film (I'm just saying brick) right up until the end credits! Yes, the story itself is total nonsense, of course. And the almost-terminator Brixton moves so far away from reality that the flick should really be called a fantasy film. Still, the whole thing works really well. That's because Leitch and his actors proceed with the necessary self-irony and put the fun in the foreground. And as a viewer, you really have a lot of that here.

The action sequences and fight scenes are superbly executed. Even if the rules of gravity and logic are broken here many a time, the entertainment value of the story skyrockets whenever things really get down to business. Only when there is an attempt to give the whole thing some dramatic depth, it becomes rather unintentionally funny. Fortunately, such moments are in the absolute minority. Dwayne Johnson and Jason Statham are a wonderful duo that you just love to watch. Idris Elba is very cool as the villain and Vanessa Kirby is a great addition to the team. Clearly, everything was really done right with the casting.

Fast & Furious: Hobbs & Shaw is truly not an intellectual flight of fancy. But - and this is much more important in this case - the film is perfect popcorn cinema with a great duo that you'll want to see more of in the future. As a viewer, you get over two hours of the best action entertainment for your money here, which can easily rival the last Fast & Furious parts. For this, there is clearly a: Absolutely worth seeing!