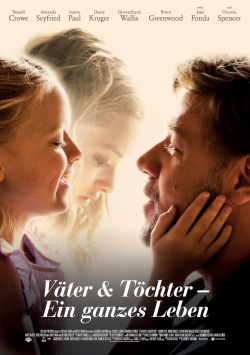 Fathers and Daughters - A Whole Life

New York, 1989: Successful writer Jake Davis (Russell Crowe) tries everything to be a good father to his young daughter Katie (Kylie Rogers) after the death of his wife. But the tragic loss takes an extreme toll on Jake psychologically and soon he sees no other way out but to seek psychiatric treatment. Katie, meanwhile, is placed in the care of her Aunt Elizabeth (Diane Kruger) and Uncle William (Bruce Greenwood). When Jake is released after a few months, he faces another uphill battle, this time for custody of Katie. Although his health is getting worse, Jake fights like a lion for his daughter and writes a book on the side, which will become his biggest success. But this intense time also leaves its mark on Katie, which she still struggles with 25 years later as a trained psychologist (Amanda Seyfried).

With Fathers and Daughters, Gabriele Muccino (The Pursuit of Happiness, Seven Lives) once again delivers some very big emotional cinema. No question, the story isn't exactly original and is full of clichés. When the adult Katie is supposed to take care of a little girl who hasn't spoken a word since her parents died, it's clear from the first moment that there will be this one moment when the girl will speak to Katie. And that moment comes at exactly the point where every viewer will expect it. The production is full of such predictable elements. These are so obviously used to stimulate the audience's tear gland that it could well be called manipulative. Russel Crowe's acting can also be described as a little over the top, at least in the moments when he is struggling with his fits. Subtlety is truly not the film's strong suit.

And yet, the touching father-daughter story works very well in the end - at least if you have a soft spot for cheesy Hollywood cinema. There are many scenes between Jake and little Katie that just go to the heart and - also due to the musical background - could cause some tears. And then when you see how this time in her life has affected the adult Katie, it's quite stirring - predictable and contrived, but stirring. You wish the young woman could put the past behind her and find happiness with the likeable Cameron (Breaking Bad star Aaron Paul).

Some characters are drawn very superficially. The aunt played by Diane Kruger, for instance, is such a collection of clichés that she's almost a caricature. And even with other characters like the snarky publishing agent with a heart of gold (Jane Fonda), you feel like you've seen them before in countless other movies. But Muccino's production doesn't even try to mask this high level of recognition and manipulative use of kitsch moments. With a good ensemble, beautiful pictures and touching scenes he tells a really nice story, which despite all its weaknesses entertains and touches well. And for that, despite all the justified criticisms at the end, there is also a decent: Worth seeing!

Cinema trailer for the movie "Fathers and Daughters - A Whole Life (USA 2015)"
Loading the player ...