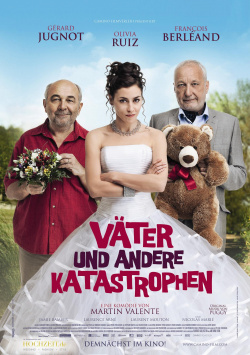 Fathers and other disasters

What can go wrong at a wedding has been the subject of countless films, sometimes more, sometimes less amusing. But what happens when one's own father is too embarrassing and instead of him an actor should lead the bride to the altar, now shows the French comedy Fathers and other disasters. In front of her fiancé, the successful tennis player Stephen (Jamie Bamber Griffith), Chloé (Olivia Ruiz) simply cannot admit that her father Gustave (Gérard Jugnot) is a good-for-nothing drunk who never misses an opportunity to disappoint his daughter. And so she simply hires an actor to play the part of the well-off, suave father. What Chloé doesn't suspect is that the supposed actor Bernard (Francois Berléand), a wealthy obsessive-compulsive, is actually her biological father, who has only now learned of his daughter's existence. This already sounds like pre-programmed chaos. But the fact that the unknowing Gustave has also befriended his rival Bernard and now wants to secretly observe the wedding festivities makes it almost impossible for the situation not to escalate...

Fathers and Other Disasters is a typical French comedy of mistaken identity that provides entertaining entertainment with plenty of over-the-top humor and charming characters. Although the staging seems a bit flat and uninspired at times, thanks to the good interplay between the two main actors, there is plenty of good humour to be had, even despite a few weak gags. Gérard Jugnot and Francois Berléand, who already worked together on The Children of Monsieur Mathieu, carry the comedy as a mismatched duo not only in its strong but also in its rather shallow moments. Berléand clearly has the best laughs on his side as the uptight obsessive-compulsive.

The rest of the cast unfortunately gets a bit lost next to the strong duo. Jamie Bamber Griffith, known from the series Battlestar Galactica, for instance, completely pales next to the comedic timing of Jugnot and Berléand. And while Olivia Ruiz certainly puts up a good fight, her performance comes across as nowhere near as relaxed and engaging as that of her movie fathers. But even if the supporting cast remains a bit colourless, the production makes use of several clichés and the gags sometimes don't hit the mark, Fathers and Other Disasters works really well. Because it's obvious from the opening credits that the film doesn't want to achieve anything more than to put the audience in a good mood. And in the end it succeeds really well.

A little buddy comedy, some slapstick, a touch of romance and a lot of classic comedy of mistaken identity, these are the ingredients director Martin Valente has used to put together his light-hearted wedding fun. If you're just looking for light French entertainment cinema with some hearty laughs, two charming leads and an amusing story, you can safely seek out these wedding festivities. Worth seeing!

Cinema trailer for the movie "Fathers and other disasters (Frankreich 2011)"
Loading the player ...