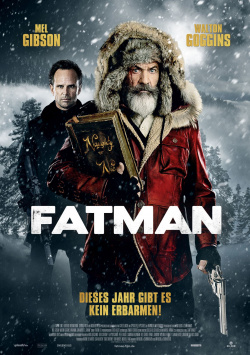 Things have looked better for Chris Cringle (Mel Gibson), better known as Santa Claus. With more and more naughty children who don't deserve presents, he can no longer pay the bills for his elf workshop, so he has to sign a multi-month contract with the U.S. military. Instead of toys, he now produces weapons. As if that wasn't enough, he also incurs the wrath of spoiled teen Billy Wenan (Chance Hurstfield), who is so frustrated that he didn't get the gift he desperately wanted that he hires a hit man named Skinny Man (Walton Goggins). His job is to knock Santa's lights out for good. For the killer, this assignment is very personal, as he has had it in for Santa for a long time. But even with a huge arsenal of weapons, Skinny Man must ask himself if Santa really can be taken out that easily.

This is a Christmas movie of a completely different kind: "Fatman" is somewhat reminiscent of the fake trailer for an extremely brutal Christmas movie featuring a trigger-happy Santa featured in the classic comedy "The Ghosts I Called". Brothers Eshom and Ian Nelms wrote the script 14 years ago and have been tweaking it ever since. However, despite very positive feedback, they never managed to raise the budget for this black comedy. One reason was that the story often shifts back and forth between different genres. Sometimes it's more of a comedy, other times it's a drama or an action thriller.

It wasn't until Mel Gibson took a liking to the idea of playing this very unique version of Santa Claus that movement finally came to the project. The addition of Walton Goggins ("The Unicorn", "The Shield") and Oscar-nominated Marianne Jean-Baptiste as Chris Cringle's wife was a high-profile addition to the ensemble. Now the brothers have finally been able to direct their very own Christmas movie, which on the whole is really very good entertainment. The satirical undertone works particularly well, providing some really good moments, especially in the plot line about the US military wanting to harness the skill of the Christmas elves.

Mel Gibson is perfectly cast in this version of Santa. On the one hand he's convincing as a curmudgeon, a badass swashbuckler, but on the other hand he's emotional, disappointed by the changes around him, and a loving husband. Those who like things traditional will probably be less comfortable with this Santa - but that doesn't change the fact that Gibson delivers a pleasantly layered performance here.

Not all the plot elements come together coherently in the end. But all in all, the Nelms brothers have succeeded in making an unconventional, bitterly wicked and very entertaining (anti-)Christmas movie, which actually reveals something like a hopeful, conciliatory message at the end after a lot of action and bloodshed. Despite a few minor flaws, this definitely gets a: worth seeing!

"Fatman" was actually supposed to open in theaters on Dec. 10. Already at the end of November it can be seen at the drive-in Gravenbruch.

Update: The planned theatrical release has been canceled. As of 04.12.2020 the film will be available digitally!