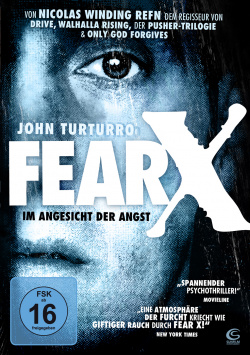 Movie: The world of Harry (John Turturro), a security guard at a large shopping mall, is completely broken down when his wife is murdered in the mall's underground parking lot one day for seemingly no reason. Since even the police can't help him much, Harry tries to find out on his own who is responsible for his wife's death. He obsessively searches through the tapes of the mall's surveillance cameras, hoping to find clues to the culprit there. But it's not there, but in a house in his neighborhood that Harry finally finds a clue that leads him to a small town in Montana. But when he starts asking questions there, he causes dangerous anxiety for one resident in particular...

Fear X - In the Face of Fear was an important film for director Nicolas Winding Refn in many ways. For one thing, it was his first English-language production after Pusher and Bleeder. On the other hand, he was able to work on the script together with one of his great idols, the author Hubert Selby Jr. (Last Exit Brooklyn, Requiem for a Dream). Especially compared to his last film Drive, Fear X - Im Angesicht der Angst shows some clear weaknesses. In addition, the film eludes the viewing habits of many viewers on several levels. Nevertheless, the thriller has a fascinating atmosphere in its own way, which already reveals the signature of later films by Nicolas Winding Refn.

To admit, not much happens in the film truly. Some moments seem to live almost on standstill, are filled with an oppressive silence, which is broken only now and then by the music of Brian Eno. Here and there the influence of filmmakers like David Lynch is noticeable, but at the same time it becomes clear that Refn was also looking for his very own style. However, this is at the expense of the dramaturgy, which Refn has deliberately kept cryptic. Especially the last 15 minutes are one big question mark for the viewer, for which there is no real resolution. Even the director says in the audio commentary that even he doesn't know the why, for which the audience will be desperately searching.

In an interview with the BBC, he also admitted that he had deliberately removed any hints of a logical resolution from the story, and thus may have harmed the film. On the other hand, he tells us in the audio commentary, he is very happy with the result himself. For him, he says, a film is only interesting anyway if it presents a challenge. And that is completely true of Fear X. Not only does it require a whole lot of patience to watch Harry's grief slowly turn into obsession, which in turn could turn into madness, but the many questions left unanswered at the end and an almost psychedelic sequence (the style of which Refn later picked up again in Valhalla Rising in a slightly different form) are likely to knock many viewers right over the head. It is absolutely necessary to engage not only with the extremely slow narrative pace, but also with the fact that the mise-en-scène allows for multiple possible interpretations and offers no clear answer.

Thus, those who expect a clearly structured story will be bored or annoyed and turn off the DVD after 30 minutes at the latest. But if you like mysterious, convoluted and very cryptically told thrillers and who wants to understand the development of filmmaker Nicolas Winding Refn, should definitely go on this atmospheric trip.

Picture + Sound: That the film was made almost ten years ago with a relatively low budget, can also be seen in the picture quality. Although the DVD has overall around a decent image sharpness, but especially in the detail representation there are here and there some clear weak points. The reduced color scheme, on the other hand, supports the gloomy atmosphere of the thriller, which also applies to the very restrained sound. The dialogues are mixed well understandable, otherwise silence, quiet music and minimal sound effects rule. Good!

Extras: The most important extra is probably the audio commentary, which Nicolas Winding Refn as already with Bronson or Valhalla Rising again together with the film journalist Alan Jones has recorded. So the whole thing is more of an interview related to the film, in which the director reveals why he decided to shoot in English and outside of Denmark, how high the budget was or how he was able to manage the tight shooting schedule. A highly interesting commentary, which unfortunately has not been subtitled. If you know English and are interested in filmmaking, you should definitely listen to the conversation of these two men.

In addition, the DVD has a quite worth seeing Making of (approx. 25 min.) to offer, which also goes into some details mentioned in the commentary. In addition, there is the trailer for the film as well as other program tips from the provider. Good!

Conclusion: Fear X - In the Face of Fear is an unusual thriller that, especially in the final minutes, eludes the usual viewing habits of many viewers and not only with its worn narrative demands its audience. Nevertheless, the early work of Nicolas Winding Refn (Drive) has a very special atmosphere that makes this film well worth watching for lovers of somewhat challenging, cryptic thrillers. The interesting audio commentary and the neat making of are then two more reasons to get this DVD