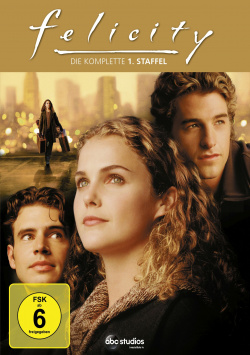 Content: High school is done and the world is now open to 17-year-old Felicity Porter (Keri Russell). Her good grades and a little help from her father have landed her a place at medical school. But an entry in her yearbook by her secret crush Ben (Scott Speedman) causes the inherently sensible girl to throw all her plans out the window. She's sure, based on what he's written, that there's a very special connection between her and Ben. And therefore, without the financial support of her parents, she follows her beloved to New York. Here she not only has to find a suitable course of study, but also has to take care of the financing and deal with an extremely strange roommate (Amanda Foreman). This wouldn't be a big deal if it weren't for the horrible realization that she completely misinterpreted Ben's entry. When she meets charming Noel (Scott Foley), the emotional chaos is perfect. And to think, freshman year hasn't even really started yet.

It's hard to believe, but Felicity set the foundation for J.J. Abrams' career, which peaked so far in 2015 when he directed the new Star Wars movie. Through Alias, Lost, Super 8 or Star Trek, Abrams is more familiar to fantasy and sci-fi fans. A romantic college series doesn't quite fit into the overall picture (despite a rather unexpected time travel plot in the final season). But on closer inspection, Felicity already reveals much of what makes the later works of the successful director and producer so popular with his fans. There are the very lovingly drawn characters who maneuver through everyday situations with sometimes very amusing dialogue and all-too-human actions. Abrams and his co-series creator Matt Reeves (Cloverfield, Planet of the Apes: Revolution) have created characters that are quite easy to identify with as a viewer. Even if the dramaturgy is of course a bit overdone from time to time, the protagonists don't seem overstylized, but genuine and simply likeable. This alone has allowed the series to stand out from the crowd of similar productions and build up a small loyal fan base, who should be very pleased with the belated DVD release.

Although some aspects of the series seem slightly dated, overall it still feels pleasingly fresh even after more than 15 years. The stories involving Felicity, Noel, Ben, Elena, Sean (played by Greg Grunberg, an old childhood pal of J.J. Abrams), Meghan, and Julie have lost none of their wit, charm, or drama. While the love triangle of Felicity, Ben and Noel may be the focus, it's the many subplots that make this series so worth watching. What's the deal with Felicity's very strange roommate Meghan? Will Sean ever in his life have a really good idea for an invention? Was Julie actually raped by a fellow student? What happens to Felicity's beau Todd Mulcahy? And does Elena actually get involved in a disastrous affair with a professor? These are just a few of the events from season 1, as the series gradually finds its own tone, pace, and distinct charm. Since seasons 2 and 3 were a qualitative increase, it is to be hoped that the remaining season boxes will be released in Germany. Until then, there is now but only once for Felicity's first year at the New York University a very clear: Absolutely worth seeing!!!

Picture + Sound: The image and sound quality of the DVD is the age of the series quite noticeable. Presented are the episodes in the original 4:3 full frame format. Colors are quite punchy and overall image sharpness is at a decent TV level. However, there is also some slight picture noise every now and then, from which the sharpness of detail also suffers. For nearly fifteen years old source material, however, the overall result is quite successful. The same can be said for the stereo mix, which allows voices to ring out of the home theater speakers with good clarity, but reproduces ambient noise and minor sound effects in a relatively dull manner.

Extras: The season box set doesn't offer many extras. However, the two audio commentaries by J.J. Abrams and Matt Reeves on the pilot episode and the season finale are really worth listening to!

Conclusion: Felicity still works really well over 15 years after its initial airing. Even if some aspects seem slightly dated, the story, actors and staging still exude a mighty lot of charm today. J.J. Abrams and Matt Reeves have created a timelessly beautiful series, whose first season is now finally released in Germany. In the end, the only thing that remains is the hope that seasons 2 - 4 will also make it into our stores. Considering the age of the series, the DVD is well done, the bonus material is meager, but extremely worth listening to! Overall, there is for this season box a: Absolutely recommended!