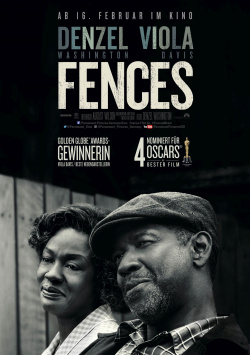 Once upon a time, Troy Maxson (Denzel Washington) was a first-rate baseball player who would have had a great career had black players been eligible for the Majer League back then. Now, in 1950s Pittsburgh, he must try to make a decent living as a garbage man for his wife Rose (Viola Davis) and son Cory (Jovan Adepo). But the shattered dream of great fame won't let him go, even after all these years, and eats him up inside. Driven by this disappointment, Troy allows himself to be seduced into a misstep that could tear his family apart.

With Fences, lead actor and director Denzel Washington has adapted the Pulitzer Prize-winning stage play by August Wilson, who also wrote the screenplay before his death in 2005. Even though it's visually simple, the film absolutely looks like a great motion picture based on the authentic '50s look alone. Otherwise - and you should definitely be prepared for this - the film adaptation of Fences is also a drama through and through. The dialogue and the truly great acting by all the actors feel - in the best sense of the word - theatrical.

The action takes place for the most part in the backyard of Troy's house. Here, for well over two hours, there is talking, arguing, philosophizing, laughing and crying. It's a little exhausting at times. When Troy delivers one of his long monologues, it's not always easy to keep your mind fully on the subject. You shouldn't go into the movie feeling a little tired, nor should you expect to get something else than long dialogues. Because then going to the cinema could become a real challenge for nerves and patience.

However, if you know what you're getting into, you'll be rewarded with some quite great acting cinema and an extremely grippingly written piece. Fences is the debunking of the myth that everything used to be better. It is the deconstruction of the image of the perfect American family that was omnipresent in cinema and television, especially in the 50s and 60s. And it's a gripping portrait of a man who can't let the disappointment of his past rest, threatening to drag everyone around him into an emotional abyss. This is quite great cinema in its understated way, for which there is then only one possible conclusion: Absolutely recommended!