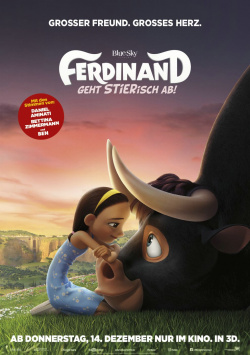 A real bull lives only for being allowed to fight one day in the big arena against one of the famous matadors. At least, that's what Ferdinand has been told since early childhood. But Ferdinand doesn't like fighting. Instead, he loves flowers and everything that makes life colourful and cheerful. When his father doesn't return from a fight one day, the young bull realises that he has only one way out: Escape from the farm. He succeeds and is taken in far away by little Nina and her father. With them he can live out his love for nature and grow up happily. But years later, when he has grown into a mighty bull, his peace-loving character is no longer apparent and after a misunderstanding he is captured as a wild animal and brought to, of all places, the farm from which he once escaped. Soon he is to be sent to the arena, something Ferdinand must prevent at all costs. But to do so, he desperately needs help.

As early as 1938, the story of Ferdinand the flower-loving bull, imagined by Munro Leaf, was adapted as an animated short film and even won an Academy Award. Now the popular children's book has been made into a film again. Ferdinand - goes STIERisch ab bloats the story, of course, considerably and adapts it to the practices of contemporary animated films. As a result, the animated animal adventure has a little more wit and pace, but also less charm. Sure, the characters - most notably bull Ferdinand - are quite likable and there are some very funny moments. Other scenes are even a little touching or - at least for children - exciting.

When things threaten to get really dark, that darkness is lifted a little later. So don't worry: Children from 6 years on will not leave the cinema traumatized, but rather well entertained. Still: Everything seems as if it had been seen dozens of times before in other animated films. The look of the characters, the dramaturgical structure, the gags and the music - all this is so ordinary that despite the positive aspects, there is no real enthusiasm. And if you compare the whole thing with much more imaginative and charming works like Coco, then it becomes clear that behind Ferdinand - geht STIERisch ab is less creativity than financial calculation.

It must be said, however, that the target audience - in this case the children - will hardly bother. They get a funny and exciting animation adventure with a lovable hero, so it doesn't matter if the story is good or the gags are subversive. Therefore: As pure afternoon entertainment for small animation fans Ferdinand - geht STIERisch ab is quite nice and well worth seeing. But if you want to see an animated film that goes a little bit off the beaten track and has a certain recognition value, you will be bitterly disappointed.

Cinema trailer for the movie "Ferdinand - Goes STIERish off (USA 2017)"
Loading the player ...