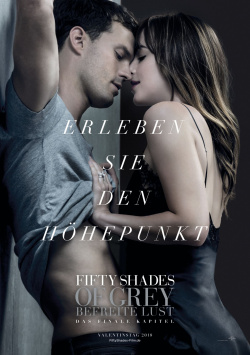 It hasn't been an easy road, but now Ana (Dakota Johnson) and Christian (Jamie Dornan) are actually standing at the altar. After a wonderful celebration, the couple enjoys a few dreamy days on their honeymoon - but their happiness doesn't last. For there is Someone from Christian's past who wants to destroy not only the happiness of the two, but the entire Grey family. It's Someone Ana is also dramatically connected to. And instead of being able to enjoy their time together, the couple find themselves in a whirlpool of threats - and have to contend with very different relationship difficulties along the way.

Two things right up front: first, Fifty Shades of Grey - Liberated Desire is a movie for fans of the books and the first two films. It is not a work for critics, for cineastes or for viewers who already had little to do with the first two parts. Therefore, I will try to evaluate the finale of the trilogy with respect to the target audience. And there I come to the second point: I clearly don't belong to this target audience and therefore I might be too critical about some aspects that don't strike fans of the movies negatively. But while my overall assessment may sound harsh (please don't hit me, Mr. Grey!!), I'd like to preface the actual conclusion already by saying that for those for whom the film is made, it will work and provide a more or less satisfying conclusion.

So, having said that, to the film. Yes, it offers its target audience plenty of romance, some sex (though considerably less and tamer than in the previous films - bondage and whipping notwithstanding), and a smidgen of suspense. But: It's not really good - neither written, nor staged. The wedding, for instance, which so many fans have been eagerly awaiting, is only briefly reeled off in the opening credits. Then the first moment that shows how little value is placed on logic: after Christian has showered his Ana with gifts for two films and bought the publishing house she works for, she stands wide-eyed in front of his private jet and asks incredulously: "It's yours? only for him to patronizingly reply: Now it's ours. Let's face it, even those who like the movies have to roll their eyes at moments like this, don't they?

Now here come some minor spoilers, but I'll hold back as best I can: One evening, Ana is attacked in what should be her well-guarded luxury apartment (which also now belongs to her, the lucky Mrs. Grey). The crook - who it is is actually revealed in the trailer, but I'd rather not say here anyway - is then overpowered by two bodyguards. This is so amateurishly executed that this scene isn't exciting, it's just unintentionally hilarious. There are countless other examples of how shallow the whole thing actually is underneath the fancy glossy cover.

This also applies to the development of the characters. Time and time again, you have to wonder: would Christian's behavior with Ana have gotten him this far if he weren't rich? Hand on heart - the answer to that is clearly: No. In the third part he again does some things that should be a reason for separation for every sensible thinking woman. The fact that the whole thing is just a fairy tale doesn't really count as an excuse. But what good is all the criticizing and ranting if the movie makes the people it's made for happy. Let them have it, thankfully no one is forced to watch the movies. And for those who want to see this finale, the overly obvious flaws don't matter at all and for them the film is: thoroughly worth watching.