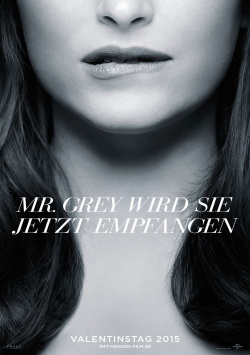 It is never a good sign when a distributor does everything in its power to prevent the press from reporting on a film in advance and instead places countless ads in the relevant media and online portals that virtually beat this film into the collective consciousness. This is the case with Fifty Shades of Grey in a particularly extreme way, because after all, those responsible don't want to let the extreme hype surrounding the film adaptation of the million-seller be ruined by negative reporting. Besides, the film is not made for the critics, but for the fans - and they should be attracted in droves to the cinemas. Very loyal fans of the book sometimes react with extreme indignation if one expresses quiet criticism of the quality of the novels and the film adaptation. There seem to be only two camps: Those who love the book (although many of them admit that it's bad from a purely literary point of view, but still a lot of fun) and those who dislike and downright hate everything Fifty Shades of Grey is on. It is precisely this extreme polarization and extreme secrecy on the part of the distributor that makes a factual review of the film a real challenge.

Because actually, a film review of Fifty Shades of Grey seems completely unnecessary due to the clearly divided fronts. Those who love the book see all the critics as just haters and trolls who don't want them to enjoy the story anyway. And those who don't like the book will never want to believe that there may be positive sides to this extremely hyped phenomenon that even hardware stores (!) are profiting from. Nevertheless, an attempt will be made here to evaluate the film as impartially as possible for what it is: light entertainment that is clearly aimed at a specific target audience. Does the bestselling adaptation work as such? Is the film really just for women? Do the 20 minutes of sex scenes really offer tingling eroticism or just undercooled prudishness?

The story itself plays only a minor role, as in the book, but it is very simply constructed: When 21-year-old college student Anastasia Steele (Dakota Johnson) takes on an interview for the university newspaper with heavy-hitting young entrepreneur Christian Grey (Jamie Dornan) as a favor to her ailing friend Kate (Eloise Mumford), she has no idea that this meeting will change her life forever. At first she is intimidated and repulsed by the billionaire's condescending demeanor, but at the same time finds herself attracted to his blunt lewdness in a way she has never been before. After the interview doesn't go quite as Ana expected, she assumes she'll never see Christian again. But far from it. The attractive entrepreneur is also extremely taken with the student and desperately wants to see her again. A hot affair develops between the two, in which Christian takes Anastasia into a world full of sexual abysses that let her experience a whole new kind of passion. But can a real relationship be built on this kind of sexual submission? Or is Christian Grey perhaps incapable of real love?

To be blunt: From a purely technical standpoint, Fifty Shades of Grey is not a bad movie. The atmospheric camerawork by Seamus McGarvey (Abbitte, The Avengers), the moodily chosen music and the direction leave quite a positive impression, even if you can clearly tell in some places that author E. L. James hardly allowed director Sam Taylor-Johnson (Nowhere Boy) any creative freedom in the development of the characters. In addition, Dakota Johnson in particular does a pretty good job of giving the character of Anastasia Steele a more interesting character all her own than was the case in the book. The transformation Ana undergoes over the course of the film is portrayed just as believably by the daughter of Don Miami Vice Johnson, as is the mixture of curiosity, lust and desire that Christian awakens in her - even if, especially in the first half of the film, she starts breathing heavily a little too often on the smallest of occasions. Some of the supporting cast also do quite well when measured against the material they had to work with, which, in tandem with the visuals and music, makes for some thoroughly watchable moments. Only Jamie Dornan remains relatively pale as Christian Grey. The charismatic alpha that this character is supposed to be, you don't really take him. His answer to Ana's question whether she would sleep together now is therefore more unintentionally funny than sexy.

The biggest problem of the film is undoubtedly the script, on which E. L. James has had too much influence. Even if she became successful and wealthy from the books, that doesn't make her a good writer. One must never forget that Fifty Shades was originally Twilight fan fiction, in which the author, as Snowqueen`s Icedragon, lived out her fantasy about the erotic adventures of Bella Swan and Edward Cullen, enriched with hot bondage games. Even if the resulting trilogy has a very special appeal and a high entertainment value for many female readers, no one will be able to deny that the books, which have sold millions of copies, are very simply knitted light fiction. And there's nothing wrong with that, because sometimes it's the simplest things that are the most fun. It only becomes problematic when the author takes her work more seriously than it actually is. In the right hands, much more could have been made out of her story and some interesting aspects could have been added to the relationship between Anastasia and Christian, especially on a psychological level. But James obviously knew well how to prevent that, which is why the weaknesses of the book are also fully noticeable on the screen.

In the book, the terrible and sometimes somewhat dubious dialogues (If you become my slave, I am fully devoted to you) perhaps do not play a supporting role, since the readers are primarily concerned with the exciting sex scenes. The question now is whether the film can also profit from the tingling eroticism. The answer to that is a resounding yes. The fact is that the sex scenes have been toned down considerably for the film version. Particularly explosive moments like the infamous tampon scene were rejected for the film from the start. What's left is respectably filmed, but nothing really exciting. And since the sex is served up rather lukewarm after all, despite attractive bodies and slapping lashes, the unintentionally hilarious dialogue and the unbearably intense dime novel kitsch in some scenes are unfortunately more noticeable than in the book.

Fans will probably only be marginally bothered by this. While the high expectations of the film adaptation of their favorite book will perhaps lead some to be a tiny bit disappointed by this light version of the book, enough will probably devour the film version of this love story with relish and can hardly wait for the two sequels despite the rather embarrassing finale. And so, in the end, we are left with the unsurprising conclusion: Fifty Shades of Grey will certainly not turn critics of the book into fans. It's not a particularly good movie, but it's still one that satisfies a large portion of its target audience. And if those for whom the film was made leave the cinema happy at the end, and then in one or the other relationship a little new fire is kindled by the cinema visit, then the flick definitely has its justification - even if it disappoints from an artistic point of view. And that's why for all of you who loved the book and who are not only interested in the sex scenes, there is a clear: Worth seeing! And for everyone else there are enough other movies for which the entrance fee is better invested!

Cinema trailer for the movie "Fifty Shades of Grey (USA 2015)"
Loading the player ...