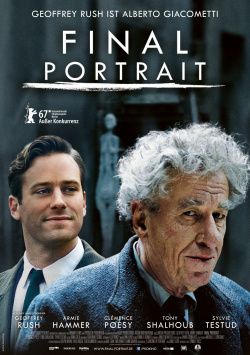 Writer and avid art lover James Lord (Armie Hammer) is on a trip to Paris in 1964. While there, he is persuaded by a friend to sit for a portrait. It wouldn't take more than three hours. Lord agrees, after all, none other than the great Alberto Giacometti (Geoffrey Rush) is to paint the portrait. But it soon becomes clear that this will not be a matter of a few hours. For the writer meets an extremely eccentric and moody artist whose working methods are fascinating but also disturbing. So hours turn into days and days into weeks. Again and again Lord has to postpone his planned departure - but the painting is not and will not be finished. And the longer he is involved in the idiosyncratic artist's creative process, the greater his insight into a life that is as chaotic as it is irritating, and always good for a surprise.

As an actor, Stanley Tucci is beyond reproach - even when he's in lowbrow films like the Transformers flicks. As a director, he also reveals a good hand in many an aspect - such as when it comes to imagery. He is, as an actor, definitely a passionate filmmaker. Final Portrait, his homage to Alberto Giacometti, certainly shows that. In Geoffrey Rush, moreover, he has found a leading man who can handle even such challenging roles with flying colors. But all this unfortunately doesn't hide the fact that Tucci is rather disappointing as a storyteller.

Too much relies on Rush's performance being strong enough to captivate the audience. The actual story takes a back seat to that. The problem is that Giacometti isn't really a sympathetic character. In the film, he is the cliché of an artist's soul dripping with self-pity, who has donned a protective armor of eccentricity and egotism for fear of delivering anything other than perfection. His behavior is meant to show what a great artist Giacometti was, but only leaves the viewer with an impression of what a difficult personality he may have been - one you wouldn't necessarily want to spend much time with.

Despite good actors and atmospheric imagery, Final Portrait is a bulky, tough, and unentertaining film. It's a failed attempt to artfully stage a film about an artist. It's about as exciting and involving as watching paint dry on canvas. For that, unfortunately, there is only one: Still worth seeing with significant cutbacks for hardcore art and arthouse lovers!