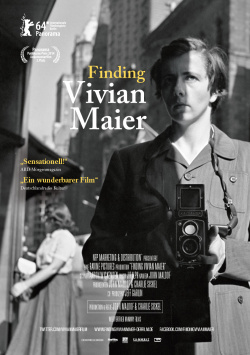 Sometimes chance brings out the most incredible stories. The documentary Finding Vivian Maier tells one such story, which begins when 29-year-old historian John Maloof bought a box full of old negatives at an auction house for a book about Chicago's Portage Park neighborhood. After none of the photos inside were suitable for the book, that box was first stowed away in a closet. It wasn't until two years later that Maloof realized he had stumbled upon a little treasure. For the photos showed great street photography of Chicago, revealing an excellent eye for hidden beauties and fascinating everyday details. Initial research into the owner of the photos, a certain Vivian Maier, yielded no results. It wasn't until Maloof came across the woman's obituary in 2009 that he decided to find out more about her, her life, and her photographs. Little by little, the picture of a very reclusive nanny whose estate is far larger than Maloof could have imagined opened up to him.

Finding Vivian Maier is an absolutely fascinating documentary. This isn't just due to the fact that most of the photos that have come to light through Maloof's research are a great testament to an undiscovered talent. Rather, it's because of the mystery that is Vivian Maier that Maloof is trying to unravel. His journey to do so is as fascinating as the results of his conversations with former clients and people who were mentored by Maier as a child. The picture that emerges is of a very eccentric woman who never left home without a camera, who captured her fellow human beings and their everyday lives in her city with photographs and films, but who herself remained something of a phantom. Even the people she had lived with for a long time didn't really know her, didn't know why she collected countless newspaper clippings or why she took thousands of photos but never had them developed.

Not everything you learn about Vivian Maier puts the loner in a particularly good light. Some of it is even downright disturbing, such as when it is told that she photographed a boy after a car accident instead of helping in any way. Maloof herself also has to wonder whether Maier would really have wanted the attention her photos are now attracting, even in the art world with exhibitions all over the world. Whether she would have been spooked by the fame and recognition she receives posthumously rather than happy to be in the spotlight. What he and the audience learn about Vivian Maier tends to suggest that she would have done anything to prevent the publication of her photos and this film. And indeed, there are moments when the viewer is already wary of pulling back the curtain even further from what Vivian Maier has spent her life hiding from those around her.

Finding Vivian Maier is an engaging, suspenseful, moving, disturbing, and yet simply beautiful film that works just as well as a portrait of an obsessive artist as it does as a thrilling sleuthing or fascinating psychogram. A great work that can be warmly recommended not only to lovers of first-class documentaries. Absolutely worth seeing