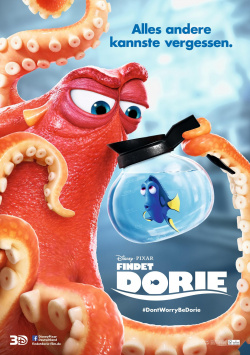 All seems well! Nemo has been found and together with daddy Marlin and forgetful Dory, the little clownfish lives contentedly in their local coral reef. Life here could be so nice, if it weren't for the dreams that increasingly haunt Dory. It seems as if she can remember her parents more and more clearly. And the traces she can make out in the short fragments of memory, she simply has to follow. Because if her parents are out there somewhere, Dorie is determined to find them. The search takes her all the way to California, where she ends up at the Marine Biological Institute. But how is she of all people, who always forgets everything, supposed to find her parents here? Or even the way back to freedom? But luckily there's Marlin and Nemo, who of course won't let their friend down.

13 years director and screenwriter Andrew Stanton took his time to direct a sequel to his blockbuster Finding Nemo. Stanton didn't want to deliver a quick fix to the many fans, but wait until he found a story worth telling. So it's a little surprising that Finding Dory swims around in all-too-familiar waters dramaturgically. Sure, the story is nice and is full of funny, but also moving moments. But the search for Dorie's parents isn't exactly original. It lacks the magic, the specialness that made Finding Nemo so timelessly good. Finding Dory is also charming in a way. Still, you keep getting the feeling that this is just a rehash of the old familiar and that the second visit to the underwater world of Nemo, Dory and Marlin simply lacks any new ideas.

No question, baby Dory is incredibly cute, octopus Hank is a real asset to the film and the sea lions Smutje and Boje, who speak Bavarian in the German dub, are extremely funny. In addition, the animation is brilliant and offers the viewer some wonderful images from which you are transported into an almost magical world. Technically, Finding Dory is one of the best animated films ever made. However, there are moments when it becomes clear that top-notch technology just isn't everything.

But ultimately, these flaws weigh very lightly. True, the high expectations and anticipation are not quite met. But what ultimately keeps the film afloat is the fact that you, as a fan of the first part, meet many beloved characters again here and just enjoy spending some more time with them - even if some moments have too high a recognition value. A nice and funny animated film for small viewers and a nice treat for adult Dorie fans. Nothing more, but also nothing less, which is why the bottom line is an absolutely deserved Absolutely Worth Seeing.

By the way, this also applies to the really adorable supporting film, which has almost as much wit, heart and charm in just a few minutes as the main film. A more than successful appetizer for the reunion with Dory, Nemo and Co. Don't miss it