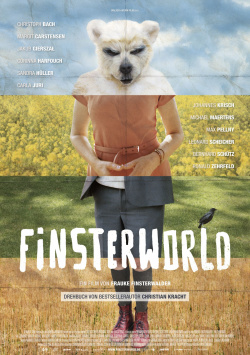 Here, the world still seems to be in order: there's chiropodist Claude (Michael Maertens) sacrificially caring for his elderly patient Frau Sandberg (Margit Carstensen), there's a mute hermit (Johannes Kirsch) living in harmony with nature, and there's a dedicated teacher (Christoph Bach) trying to teach his students (Carla Juri, Leonard Scheicher, among others), dressed in demure uniforms, about the horrors of the Nazi regime. But the cheerful song on Claude's lips, the delicious cookies he brings to Mrs. Sandberg, the loving demeanor of policeman Tom (Ronald Zehrfeld) or even the idyllic landscape - all these are just mirages. For behind the seemingly wholesome facade, things are truly sinister in this world.

Finsterworld is whimsical, wicked, disturbing, funny and uncomfortable. But first and foremost, this episodically told work is one thing: very, very unusual. There are moments that make the viewer laugh heartily, whereas other scenes are more shocking or cause astonished incomprehension. Immersed in a deceptively harmonious visual language, ever new abysses are revealed in the course of the stories, which have horrific consequences, especially for schoolgirl Natalie, played by Wetlands star Carla Juri. When the characters are introduced in their opening scenes, they still seem quite one-dimensional and clichéd. However, the audience's expectations built up as a result are quickly taken ad absurdum and the whole thing is taken in unexpected, at times extremely absurd directions.

What follows is a very well-arranged interplay of images, music and dialogues, which at times present themselves in an extremely biting and teasing manner. In this way, the film deals with themes of loneliness, longing, fear and guilt. Thereby some things are revealed very obviously, while others are hidden in a certain profundity of the production. This also makes sure that Finsterworld is a movie that can't be consumed just like that. You have to think about it, question a lot of things and analyse them more closely. It's a challenging film, but at the same time it manages to entertain well in many moments - and that's not a given, especially when it comes to German cinema.

Certainly not all pieces of this puzzle work equally well. But even if there are some weaknesses here and there, one thing can not be denied to the film: it leaves an impression that can not be shaken off so quickly. Supported by a good ensemble of actors, consisting of a coherent mixture of experienced professionals like Corinna Harfouch, Ronald Zehrfeld or Sandra Hüller and talented young actors like Carla Juri and Leonard Scheicher, filmmaker Frauke Finsterwalder has staged an unusual as well as enigmatic Heimatfilm of a very special kind, which shows how close beauty and darkness are to each other and how deep the abysses of the human soul can be. Certainly not a film suitable for mass audiences, but open-minded arthouse lovers who enjoy German cinema fare of the whimsical, satirical and black-humored kind can confidently take a trip into the Finsterworld. Worth seeing

Cinema trailer for the movie "Finsterworld (Deutschland 2013)"
Loading the player ...