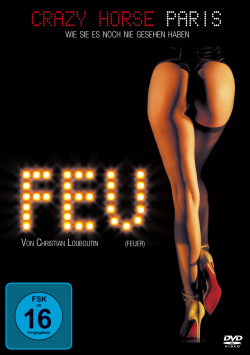 Film: When successful shoe designer Christian Louboutin and Paris' legendary Le Crazy Horse meet, something very special is bound to result. So when Louboutin, whose shoes became famous for their red soles, was offered the chance to create some scenes for the burlesque variety show's new show, he didn't have to think twice. Louboutin himself says that he is interested in anything that can be used to celebrate the female body. The combination of his shoes, dance choreographies and aesthetically presented nudity is therefore primarily intended to be one thing: a tribute to the beauty of women. An ambitious project that should not be limited to the stage of Le Crazy Horse. The performance has now also been captured on film in a 1,300sqm completely darkened studio using state-of-the-art technology. The result is Feu (Fire) by Christian Louboutin, a very special film project in twelve acts.

It's not just the individual dance performances that are shown. In between, Louboutin himself always has his say and the dancers are also allowed to introduce themselves briefly. But these small interview sequences remain a minor matter and are quickly forgotten. The individual performances, for which Louboutin drew inspiration from the music of American cult director David Lynch, have a high visual value thanks to a very aesthetic realization, which is particularly convincing in the first few minutes. Not only the bodies of the very lightly to not at all dressed ladies are staged extremely appealing. The camera also captured the actual art, namely the dancing skills of the women, very well. Here it has succeeded much better to transfer the effect of the live show into the cinema, as it has been the case recently, for example, with the screen guest performance of Cirque du Soleil.

However, here again that certain something is missing, the unique atmosphere that makes a visit to the Parisian vaudeville so special. And this ultimately leads to the fact that the viewer after some time certain signs of fatigue spread. The choreographies are still very beautiful to look at, but after one hour at the latest they are not really thrilling anymore. The fact that a very similar type of woman is always cast for Le Crazy Horse reinforces the impression of a lack of variety. For those who appreciate burlesque and eroticism, the first half of the film offers a really special movie experience that comes close to a visit to the legendary vaudeville. However, just under 90 minutes are simply too long to not let the initial enthusiasm be displaced by the ever-increasing boredom. The title-giving fire burns at the end, unfortunately, only on low flame, which is why there is as a conclusion only a with cutbacks worth seeing!

Picture + Sound: The technical implementation of the DVD makes it clear that this film was filmed with the most modern technical equipment. Although actually designed for a 3D evaluation, the 2D version also convinces with a very high image sharpness and a pleasant color scheme. As for the sound, the music is in the foreground in most scenes and has been mixed with a pleasant spatiality. The commentary from Christian Louboutin and the dancers is mixed very centrally, while also sounding very powerful from the speakers. Good!

Extras: The DVD itself has to offer as a bonus only the trailer to the film. But as an extra supplement there is a multi-page, richly illustrated booklet and a double-sided poster.

Conclusion: Feu (Fire) by Christian Louboutin combines the creative visions of the creators of Le Crazy Horse and world-renowned shoe designer Christian Louboutin to create a very special show, the film version of which has been captured using state-of-the-art technology to bring the live feel of Parisian vaudeville as close as possible to the audience. This works quite well at the beginning, but wears off more and more in the course of the 90 minutes, because the special atmosphere that makes a visit to Le Crazy Horse so special is missing. Who appreciates burlesque and cultivated eroticism, this technically very well converted DVD but still can be recommended to the heart.