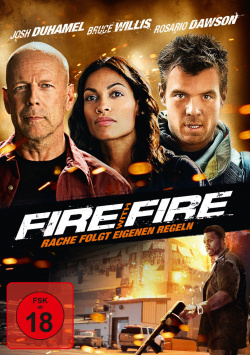 Content: Actually, firefighter Jeremy (Josh Duhamel) had only looked forward to a relaxing after work with his buddies after a strenuous mission. But when he witnesses how the store owner and his son is brutally murdered by the ruthless gangster David Hagan (Vincent D`Onofrio) and his men, his life changes abruptly. Jeremy is able to escape from the killers, but since he is the only witness to the crime for the police and must be protected from the powerful Hagan, he is unceremoniously accepted into the witness protection program. With a new name and a new job, he is taken to a city that is foreign to him. Here he must stay until Hagan is tried. Months pass, months in which Jeremy and the police officer assigned to protect him, Talia (Rosario Dawson), grow closer. The whole nightmare seems to have a happy ending for Jeremy after all. But when a professional killer (Julian McMahon) ambushes the two lovers after a fling together, Jeremy realizes that Hagan won't rest until Jeremy is dead. And with the gangster now targeting his friends and Talia as well, and the police powerless to do anything about it, the firefighter has no choice but to take the law into his own hands...

David Barrett, a former stuntman who has distinguished himself in recent years especially as a director of TV series such as Castle or The Mentalist, delivers with Fire with Fire a solid revenge thriller, for which he could unite a very appealing cast ensemble in front of the camera. In addition to Josh Duhamel (Transformers) can convince especially the wonderfully exaggerated evil acting Vincent D`Onofrio and the always reliable Bruce Willis, although the Die Hard star in his supporting role as a cop must spend most of the time behind the desk and may not really prove his true action qualities.

The decent actors are then also, which together with some good action sequences help the film out of mediocrity. Because the story itself is nothing more than average and offers besides not exactly polished dialogues also a lot of too often used clichés. This isn't particularly surprising, nor is it really exciting. Still, Barrett manages surprisingly well to tell the more than ordinary story in a gripping way and without emerging boredom. The almost 90 minutes runtime truly flies by. It's true that it's obvious that Barrett works primarily for television. But since many series, especially in terms of visuals, no longer have to hide from more expensive cinema productions, this is only marginally negative weight.

Fire with Fire is therefore, on balance, a stretch quite hard vigilante thriller with solid tension, a worthwhile cast and some well-executed action moments. It doesn't leave a lasting impression, to be sure. But it's certainly enough for an entertaining home cinema evening. And therefore, despite some weaknesses, especially with regard to the script, there is an absolutely deserved: worth seeing!

Picture + Sound: Many scenes of the film take place in the dark. However, thanks to good contrast and neatly tuned black levels, there is little drop in overall sharpness quality even in the many darker moments. The color scheme is very atmospheric, which comes into its own especially well during the red hot finale. The sound is convincing with a solid Dolby Digital 5.1 mix, which provides pleasant dynamics especially in the opening scene, during gunfights and during the finale with a few well-done surround effects. Good!

Extras: In the nearly 70-minute bonus material, interested viewers will find a brief look behind the scenes, as well as three in-depth interviews with Josh Duhamel, David Barrett and Curtis 50 Cent Jackson. Amusingly, the nearly 20-minute interview with rapper 50 Cent is almost three times as long as his actual appearance in the film.

Conclusion: Fire with Fire is a solid revenge thriller that can convince less with its story than with its good actors and its solidly staged action interludes. Although especially Bruce Willis delivers his supporting role rather routinely, especially Vincent D`Onofrio as an ice-cold villain is a lot of fun. No great masterpiece, but a decent genre contribution, which presents itself on DVD in good picture and sound quality and also has over 70 minutes of bonus material to offer. Recommendable