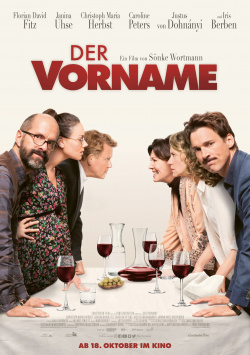 It is supposed to be a relaxed dinner to which Elisabeth (Caroline Peters), and her husband Stephan (Christoph Maria Herbst) have invited Elisabeth's brother Thomas (Florian David Fitz), his fiancée Anna (Janina Uhse) and Ren&eacute; (Justus von Dohn&aacute;nyi), a childhood friend of the family. There is actually a reason to celebrate too, as Thomas and Anna are expecting their first baby. But when Thomas reveals which first name they want to give the child, a heated discussion breaks out. This soon takes on unimagined proportions as long-hidden secrets and repressed emotions are exposed amid passionate arguments.

Back in 2012, Matthieu Delaporte and Alexandre De La Patelli&egrave;re adapted their successful play The First Name for the screen. Now Sönke Wortmann has taken on the material again. And at first it seems as if he has directed a 1:1 copy of the French original. Because his film also begins with the amusing opening sequence of the French version, which accompanies a pizza delivery man on his way through the city and already incorporates the meaning of names into the quickly edited action. And even after that, everything remains basically the same. With one crucial difference.

Wortmann has updated the story a tiny bit, so that now the AFD or Donald Trump are also addressed in the sometimes wonderfully biting dialogues. And he has intensified the whole problem, which would arise if someone would actually want to call his son Adolf, by the fact that the story is now set in Germany. And here, of course, it would have a much greater explosive effect than in France. Wortmann knows how to use this well to give the well-known story his very own touch.

That the action is almost entirely confined to Elisabeth and Stephan's living room is not noticeably distracting. Despite the spatial minimalism, the entertainment value grows tremendously as the story progresses. The verbal battles between the small group are written in such a clever and entertaining way that the audience can enjoy themselves on a very high level. This is further aided by the fact that there is extremely good chemistry within the wonderful ensemble.

First Name works particularly well in those moments when the characters reveal quite universal shortcomings, when the masks fall away and completely normal people become recognisable with all their faults, rough edges and corners. And it is precisely in these, often very, very funny moments, that it once again becomes clear how great the stage original already was - and how well it has been adapted for this German cinema version. For this, there is clearly a: Absolutely worth seeing!

Cinema trailer for the movie "The First Name (Deutschland 2018)"
Loading the player ...