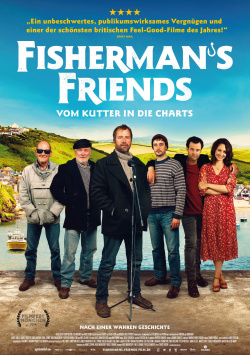 What was supposed to be a stag weekend with lots of beer and fun turns into a real nightmare for music manager Danny (Daniel Mays), who is left behind by his boss Troy (Noel Clarke) in the small fishing village of Port Isaac to sign up the local shanty choir. Unaware that the whole thing is supposed to be a joke, Danny goes all out to convince the singing sailors that they have what it takes to be a hit. At first, Danny is simply annoyed by the task and doesn't go down well with the villagers either with his arrogant manner. But the more time he spends with the Fisherman`s Friends, the more convinced he is that he really has a big fish on his hook. And indeed: After a TV appearance the volunteer sea rescuers around fisherman Jim (James Purefoy) become a hit and Danny also seems to win the heart of Jim`s daughter Alwyn (Tuppence Middleton). Everything is heading for a happy ending - but then a wrong decision by Danny could destroy everything again.

The story of Fisherman`s Friends sounds like a typical modern fairy tale. But it`s actually based on a true story. The singing sea bears from Port Isaac actually exist. In 2010, the members of the shanty choir signed a record deal for the handsome sum of 1 million pounds and immediately entered the top 10 of the British charts with their first album. They were discovered by Ian Brown, from whom the character of Danny is very loosely inspired.

Director Chris Foggin has been inspired by the truly unique success story of the Fisherman`s Friends to create a relaxed feel-good comedy, which follows a very classic scheme and therefore has little to really surprise. But Foggin rehashes the familiar in such an amusing and charming way that the audience just has a really good time. Not only the singing interludes of the choir conjure up a blissful smile on your face again and again.

Admittedly, the production could have gladly spared itself a few clichés. But any dramaturgical weakness is easily made up for by the good-humoured actors and the wonderful Cornish landscape. So it's no wonder that the success story of the chorus continued in the cinema, so that even a sequel is planned. If you want to see for yourself why so many Brits are given to the rugged charms of singing fishermen, this warm-hearted comedy is definitely not to be missed. Absolutely worth seeing!